When he gets up in the morning for his daily run in Cambridge, the weather is often cold and miserable for Harvard professor Daniel E. Lieberman. He readily concedes he has no desire to change into jogging clothes to start his daily run. “I sometimes have to force myself out the door,” admitted the evolutionary biologist.

But he does it anyway. Why? Because exercise is good for him.

His unexpected reluctance to do his regular jogging came up during a Harvard Gazette interview with Lieberman, which was somewhat surprising because his latest book is called Exercised: Why Something We Never Evolved to Do is Healthy and Rewarding. 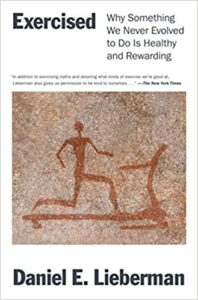 Lieberman, whose books reflect his lifelong interest in studying in cultures worldwide how people move their bodies, is among prominent advocates of an increasingly popular prescription for better health: exercise.  His latest book explodes some of the myths about exercise.

A basic tenet of the book: “Humans evolved to move. We evolved to be physically active.”

The biggest myth in his book involves human understanding of exercise.

“We live in a world where everyone knows that exercise is good for you, and yet the vast majority of people have a hard time doing it. According to government statistics, only about a quarter of Americans actually exercise in their leisure time,” he has been quoted as saying on multiple occasions.

“Humans have these deep-rooted instincts to avoid unnecessary physical activity, because until recently it was beneficial to avoid it. Now, we judge people as lazy if they don’t exercise. But they’re not lazy. They’re just being normal,” he added.

He has suggestions to foster better exercise attitudes, including finding ways to make it fun, such as walking instead of driving a car.

Repeated studies have come to the same conclusion: Exercise provides both physical and mental benefits for all ages. Older adults might be more interested in its positive impact on lower blood pressure and heart rates, as well as improved general health. Some studies have specifically found that exercise leads to better mental health.

One of the most recent studies on age and exercise found that higher levels of daily physical activity may protect against the brain tissue loss from Alzheimer’s disease that alters the lives of many older people. Researchers from Massachusetts General Hospital (MGH) reported that lowering vascular risk factors may offer protection against Alzheimer’s and delay progression of the devastating disease.

“One of the most striking findings from our study was that greater physical activity not only appeared to have positive effects on slowing cognitive decline, but also on slowing the rate of brain tissue loss over time in normal people who had high levels of amyloid plaque in the brain,” said Jasmeer Chhatwal, MD, PhD of the MGH Department of Neurology. 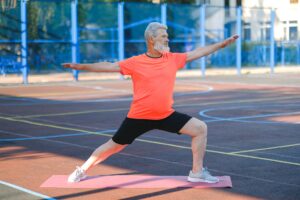 Individuals don’t have to be fanatic fitness buffs to achieve results. It can be done with only minutes of activity. Some studies found just five minutes of physical activity helps curb depression (a common condition for the elderly). Even a quick walk or a few minutes of exercise goes a long way to improve individual moods. And even those who take up exercise at older ages find it provides immediate results.

“Exercise provides a remarkable variety of health benefits, which range from strengthening bones to positive effects on mood and helping to prevent chronic illnesses. Research dating back to the late 1980s has consistently shown that aerobic fitness may help extend lives,” said Dr. Marwa W. Ahmed, a physiatrist in Brighton, Massachusetts who is affiliated with Massachusetts General Hospital.

Another prominent researcher on aging and exercise facetiously says modern medicine has a pill that prevents heart disease, improves strength and balance, alleviates arthritis and makes everyone feel younger as well. There’s just one catch, however.

There’s no such pill. The prescription is exercise.

“We’ve spent years studying numerous nutritional and lifestyle factors,” said Frank Hu, associate professor of nutrition and epidemiology at the Harvard School of Public Health. No single medication has been a panacea.

“The single thing that comes close to a magic bullet, in terms of its strong and universal benefits, is exercise.”

During the last 10 years, epidemiologists like Hu have clearly demonstrated exercise’s protective effects against many serious diseases. And yet, as one medical researcher studying exercise in elderly populations put it, “Exercise is often overlooked.”

It’s never too late to start

Age researchers such as Lieberman and others cite such common misconceptions among seniors that they are too old to continue or to start exercising. Not true, according to the experts.

“Age is really just a number,” according to exercise physiologist Evelyn O’Neill at the Boston-based Hebrew Rehabilitation Center. She should know, because she designs exercise programs for people who are close to 100 years old.