Hopedale – Ruth Pointer’s life has been split in two halves: before and after. In many ways, after has been better.

Before was based on the West Coast, where she rode a wave of success with the Pointer Sisters, known for their sonorous sounds and sinuous moves. During that time, however, Pointer’s life was riddled with alcohol and drugs, abuse, and four failed marriages, including one to Dennis Edwards of the Temptations.

After is taking place in Massachusetts, where Pointer lives with her fifth husband, Mike Sayles, who grew up in Milford. Here they have happily raised their now 26-year-old twins, Ali and Conor. Pointer’s daughter Issa, from a previous marriage, also graduated from high school in Massachusetts. Faun and Malik, Pointer’s eldest children, are from her first marriage.

Life began for Pointer and her three sisters in Oakland, Calif. The children of ministers, she said, “We sang in church all the time.”

“I never dreamed of being a famous singer, but I was leaving a very abusive relationship with my husband. I was a single mom with young children,” Pointer said. “I was making $400 a month as a key punch operator, and I realized that I could make $100 a session singing backup. My sisters were gracious enough to allow me to join the group.”

Renamed The Pointer Sisters, in 1974 the quartet won their first Grammy for Fairytale, for best country vocal performance. A few years later, Bonnie left the group to pursue a solo singing career. Now a trio, The Pointer Sisters achieved great success during the 1980s. They went on to earn two more Grammys, a star on the Hollywood Walk of Fame, and many Top 40 singles, including “I’m So Excited,” “Jump (For My Love),” and “He’s So Shy”. 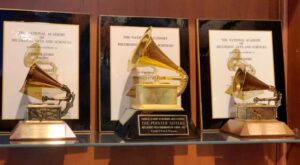 All of that came with a very high price.

With co-author Marshall Terrill, Pointer detailed her struggles in her 2016 book, “Still So Excited!: My Life as a Pointer Sister.” She described the period in 1984, when at the age of 38, after years of abusing crack cocaine, she was hospitalized with viral meningitis.

“That catapulted me into being concerned, and I had three children who I was raising as a single parent, and I thought, I’m all that they had,” she recalled.

It was time for a change.

Pointer moved from LA to Malibu to get away from what she described as “bad influences.” She worked hard on breaking her addiction to drugs and alcohol, and then food too.

She said, “Girl —  when I stopped doing cocaine I ate like crazy. I needed to change… I got involved with L. Ron Hubbard’s Dianetics and it really helped me. But it was so damn expensive. My son Malik was in the 12-step program, so I gave it a try. I stayed in it for years.”

Three years into her work at recovering, Pointer met Sayles at a Malibu gym that he co-owned. He had gotten into body building with his best friend Howie Long, himself a native of Milford,  former pro football player and now in the Football Hall of Fame.

Pointer fell hard for Sayles, and the two decided to get married and have a child. At 46, she wasn’t sure that could happen.

“I was in love and I wanted to raise a family in a traditional way with a mom and dad, which is something I had never done,” she said.”

Thanks to IVF and a donor egg from a woman of Pointer’s likeness, Pointer and Sayles’ dream came true. Pointer continued to perform. Eight months pregnant, she was on the East Coast  doing gigs and being interviewed on television about her IVF experience. She ended up having her babies by C-section in Providence, R.I.

Pointer and her husband brought their newborn son and daughter back to Malibu. During that time, terrible fires were getting close to Pointer’s house. Sayles asked her to move to Massachusetts.

“It sounded good to me. I didn’t have any more family in California, and I knew that we’d have a lot of help from his family. We had already agreed that we didn’t want to raise our children in California,” said Pointer.

She added, “I’ve always loved New England ever since The Pointer Sisters performed here. I think of it as a beautiful and traditional place… Here people don’t care as much about materialistic things… People here don’t wear their worth on their bodies like they do in California.”

Pointer and Sayles have built a wonderful life together, as evidenced by family photos displayed throughout their home, along with photos of Pointer with presidents and celebrities, and of course, awards.

The Pointer Sisters still perform, now with Pointer, her daughter Issa, and her granddaughter Sadaka. They still make those sonorous sounds and sinuous moves to hits, including — “I’m So Excited,” “Jump (For My Love),” “Automatic,” Slow Hand,” and so many more.

There is one change though – she now wears sneakers.