When people wonder whether attitude or a healthy lifestyle is more important for a long life, they only need to meet Littleton resident Hazel Plummer to be convinced that it is the former. Plummer, who will turn 107 June 19, said she prides herself on being positive.

“I’ve always looked at life as whatever happens, happens,” Hazel said. “I’m not a worrier. I never have been.”

That outlook has served her well through nearly 11 decades. Born and raised in Somerville, she grew up a street apart from her future husband, Alma – although they didn’t know it at the time. The two married in 1935 and had two children, Roger and David. April 6 would have been their 80th anniversary.

About 57 years ago the family moved to Littleton, where she has lived since. Her mother lived with them until she died at age 94; her father died relatively young at 74 from a fall that caused a blot clot.

Hazel said she believes she takes after her father who was always good-natured. Her mother, as well, was a good example for her.

“I had a good childhood,” she noted. “I’ve been a happy person all my life.”

After her father passed, her mother moved in with her and her husband.

“My mother lived with us for 22 years and never complained,” she said.

She also fondly remembers her husband who she said was a hard worker and loved to entertain children as Santa at his company and in the neighborhood.

In addition to her two sons – Roger lives in Maine and David in Littleton – Hazel has six grandchildren and four great-grandchildren.

At 106, Hazel still has an amazing memory of past events. She recalled the time she saw Charles Lindbergh walking down the street in Somerville, a grade-school teacher who used to pinch her, and the local woman doctor who owned one of the first Ford’s ever made.

“She sat very straight,” Hazel recalled. “I think she was scared.”

These days, Hazel keeps busy playing cards, listening to books on tape, and going to chat groups at the Littleton Council on Aging. She takes advantage of the senior shuttle to visit the hairdresser and eat lunch out once a week.

Her health, apart from her failing eyesight, is very good and always has been.

On April 10, members of her church, the Congregational Church of Littleton, surprised her. They brought her to the church, which is currently being renovated, and asked her to put her hands into the cement.

She ended up going along, placing her hands into the wet cement, forever to be honored as Littleton’s oldest resident in 2015.

Hazel said she can’t understand what the fuss is all about.

“Everybody at church thinks I’m the greatest thing that ever happened,” she said. “They make too much of my age – I think it’s ridiculous.” 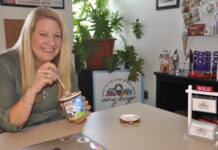 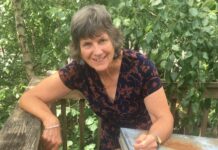