I haven’t studied the saints and I don’t spend much time thinking about them. But I know that October 4 is the feast day of St. Francis of Assisi, and that reminds me of an odd little event that established a peculiar personal connection between St. Francis and me.

St. Francis, who died in October of 1226, is the patron saint of animals and the environment. He’s often pictured in an outdoor setting surrounded by birds that perch, unafraid, on trees and bushes close by, and sometimes on his shoulders and uplifted hands.

Early one sunny spring Saturday, I was taking a walk in a neat, quiet Marlborough neighborhood, enjoying the sights of other people’s houses, lawns, and gardens, and listening to birdsong. As I turned a corner, I saw, on the sidewalk a few yards ahead of me, a male robin wrestling with an enormous worm. The worm was fat, and about as long as the robin himself.

I stopped walking so as not to interrupt the fellow’s work. If I startled him and he flew away, he might lose his morning catch. He had found a satisfying breakfast for his little ones. I didn’t want to interfere with that.

But he was having trouble figuring out how to cart the slippery giant away. He tried to pick it up, holding it in loops as a person might hold a garden hose.  But that was awkward: too much worm dragged on the ground and the robin couldn’t achieve lift-off.

As I watched, motionless and hardly daring to breathe, it occurred to him to use his beak as a pair of scissors. He sliced the worm into five or fix pieces, collected them in his beak, and off he went.

Only then did I resume my walk. 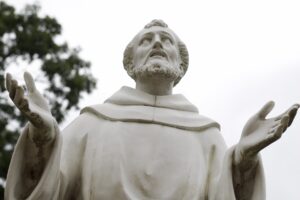 As I did, I noticed a discarded pamphlet lying nearby on an otherwise pristine lawn. The pamphlet was a brochure about St. Francis. It was almost as if the saint were saying, “Thank you for not interrupting our little friend’s struggle.”

Of course, it wasn’t St. Francis saying anything at all. It was just an old piece of paper, crumpled and damp. But what a coincidence. There should have been no paper on the well-tended lawn at all. It might have been a supermarket circular or a cable company ad. But there it lay, seeming like a message from that saintly fellow bird-lover.

Was this really a coincidence?

Some people say there’s no such thing as coincidence.

You’re doing housework and realize that you haven’t talked with your sister in a while. The phone rings. It’s your sister.

Or as you have lunch with a friend, the two of you wonder about the well-being of another friend whom neither of you has seen for a while. On your way home, you scoot into the supermarket for a few things, and there she is.

Coincidence? Are we all bouncing around making random contacts, like the balls in a pinball machine, with no meaning except what we imagine after the fact? Or are there really unseen forces – our own subconscious intentions or as writer Joseph Campbell says, “a thousand unseen helping hands” – guiding us to where we need to be, when we need to be there?

Summer insects; some are magical (fiftyplusadvocate.com)

In service of others

Indifference is Too Great a Burden to Bear