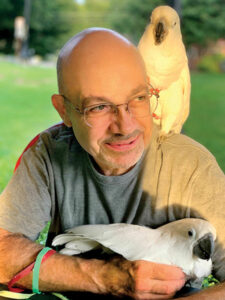 These words were spoken by creatures with feathers and beaks; part of Davis’s current flock of 13 parrots.

Caring for these birds is a huge commitment. The six cockatoos, three African Greys, and four Amazons — mostly rescued by Davis — have a life expectancy from 60 to 100 years.

For years, during warm weather, Davis has been seen walking down Hudson’s Main Street with a bird or two, each wearing a harnessed leash that he designed. “Lukey,” 34, might be perched on Davis’s left hand and “Bonnie,” 26, on the other. These Umbrella Cockatoos greet the townspeople: “Hello, hello, hello, hello.” 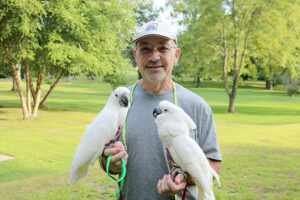 For Davis, who lives in a small old farmhouse in Hudson, his journey to birdman began 30 years ago at the Worcester Flea Market.

“My wife and I were looking for a pet for our son and daughter. We purchased a small parrot, called a Dusky Lory. We had a blast with that bird… we went back to the market a month later to buy more food, and ended up coming home with another, more sedate bird called a Jenday conure,” said Davis.

Davis realized that he could relate to birds.

“Birds are just like a 5 to 8-year-old child. They socialize like humans. They need time outside their cages…  I know when they’re having an issue, and what the issue is. Someone once told me that maybe I was a bird in a previous life,” he said. 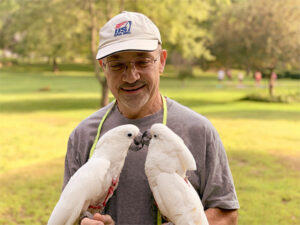 Word got out — to avian vets, breeders, and bird owners — and people turned to Davis for help. In many cases, that led him rescuing a bird. At one point, Davis and his wife housed 28 birds, each in their own cage.

Rescuing a bird is a very tricky business. Many have had multiple owners and have suffered terrible abuse. Some have been caught in the wild.

“Birds can scream for food and bite for attention. They can be vicious. Some owners get fed up and stop cleaning their cages. They beat them with sticks. Birds can develop a pure hatred for humans,” said Davis.

Bonnie, who is actually a boy, is a good example of Davis’s patience in rehabilitating an abused bird.

“Bonnie lived in Mesa, Arizona with a young woman who named what she thought were a male and female, Bonnie and Clyde. She didn’t believe that birds should be caged. The two birds had free range of her house… It turned out that her boyfriend used to kick them with his steel-toed shoes,” said Davis.

Davis has spent 13 years slowly gaining Bonnie’s trust. He can now cuddle the bird and rub under his feathers.

“Bonnie wants to be held all the time now. Cockatoos have to be taught how to separate,”  he said. “I’ve worked on that with him.”

Not all of Davis’s birds are docile, but they still spend some time outside their cages, even if it’s perched on top. 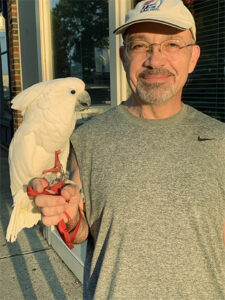 Davis has also potty trained his birds. “Just like with a young child, it takes repetition and reward. When they are out of their cages, I don’t want my birds going on my shoulder,” he said.

Since 1991, Davis’s birds have shared his farmhouse with his business, The Puzzle and Craft Factory (www.puzzle-factory.com). He designs and manufactures handmade metal and wood “mechanical puzzles, brain teasers, games and toys.

“When my kids were three and four,  I couldn’t find puzzles, so I decided to make them. As a kid, I could pull anything apart and put it back together,” he said.

He keeps on taking calls from bird owners who have lots of questions.

“I’ll visit if I can get there. In most cases, the problem is the environment and the person. I tell them that about the problem but I am going to help fix it,” said Davis.

As for rescuing more birds, Davis and his wife have decided that that cage door is closed, but you never know. As for their flock, their plan is that someday their grandchildren will take over their birds. Lukey and Bonnie will be cuddled and loved, just as they are now.

*caught in the wild 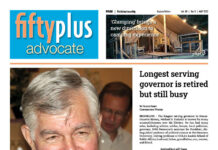