Newton – When COVID-19 hit last winter, Massachusetts-based author Anita Diamant had a plan in place. Now, months later, she has finished her most recent book, “Period. End of Sentence.”

“My agent was contacted by the group that made the Oscar-awarded film by that name. I had written some articles about menstruation, so I was intrigued and said yes to the project,” she said. “Writing the book kept me focused and gave me something meaningful to do with my time. It also kept me from worrying too much about COVID and politics, and for that, I am grateful.”

The book, anticipated to be published in May 2021, will be used to raise awareness about the work of the Pad Project. According to its website, the initiative “partners with local organizations and grassroots NGOs to fund the placement of pad machines, implement reusable cloth pad-making programs, and run menstrual hygiene management workshops in communities around the world.”

The topic of menstruation was also featured in Diamant’s award-winning, international bestseller, “The Red Tent.” Published in 1997, the novel, which was also a New York Times bestseller, is a tale about Dinah, a cipher mentioned in the Book of Genesis. The novel is filled with rich descriptions of ancient times and meaningful interactions among strong women.

“In terms of being a writer of historical fiction, I don’t write about kings and generals. My characters are people who don’t show up in history books,” she said.

When she wrote her breakthrough book, “The Red Tent,” Diamant had worked for many years as a journalist and had published several guidebooks about Jewish life.

The daughter of Holocaust survivors, growing up in Newark and Denver, Diamant had a clear Jewish experience, but did not practice organized religion.

“We joined a synagogue when my brother was 12 so he could have a bar mitzvah. I was about 14 when I started religious school,” she said.

“But the temple youth group was transformative; it exposed me to a kind of communal Jewish identity that was positive and even liberating for me,” she added.

That experience laid the groundwork for much of Diamant’s work.

Years later, Diamant’s fiancé, Jim Ball, decided to convert to Judaism prior to their wedding.

“We had already joined a Jewish book group together, and I was writing about Jewish topics for the Boston Phoenix. We were in the process of creating a Jewish home. I called Rabbi Larry Kushner — who I had interviewed — to ask if he officiated intermarriage. He said no, and then took the time to explain why. Then he asked to speak to my fiancé,” said Diamant.

Kushner, a hugely popular rabbi and author, told Diamant that she should write a book about Jewish weddings. She did and wrote a lot more. 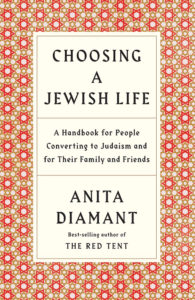 “I write guidebooks for the majority of American Jews, some affiliated and some who are not, some with a good Jewish education and some with none,” she said. “My goal is to provide a menu of choices for liberal Jews – a definition that actually includes people with all kinds of beliefs and who identify with most American denominations.

Diamant’s book on conversion, “Choosing a Jewish Life,” led to her, in 2004, to co-found Mayyim Hayyim – Living Waters Community Mikveh in Newton. Submersion in a mikveh is the last ritual for men and women before conversion, as well as for women, regaining purity after menstruation. It also purifies metal and glass kitchen items, giving them kosher status.

“While writing my book about conversion to Judaism, I went to the mikveh in Boston with clergy of different denominations to see how they crafted the experience of ritual immersion,” she said.

“Mikveh for conversion can be a powerful and positive experience, but the place itself was not welcoming. That was the genesis of the idea for a mikveh open to everyone in our community,” she added.

At the Mayyim Hayyim, part of the open mikveh movement, women and men from the straight and LGBT communities have reclaimed the ritual of the mikveh. Women visit in recognition of menopause, infertility treatments, miscarriage, abortion, and other events in life. Men visit for religious holidays and milestone events, among other reasons.

Diamant is optimistic about the future of the Jewish faith.

“The reason Judaism is still a presence in the world after so many centuries is because it is alive, which means it changes. We are part of this history of change, and a big part of what’s changing now is the inclusion of women; feminism has doubled the capacity of the Jewish people,” she said.

As for aging, she noted, “Well, words are harder to come up with, so thank heaven for Google.”