Ira Smith made a good living working as an engineer for Raytheon in its Patriot missile program, enough for him and his wife Barbara to raise their six children. But it wasn’t until they were both 60 years old that they found their true calling.

In 1990 a family who had fled violence in their native El Salvador appealed to the Smiths’  church, St. Elizabeth’s in Acton, for assistance in getting their apartment furnished. Barbara put a notice in the church bulletin and the response was overwhelming; they received much more than was needed. They offered what was left to the local housing authority, which, in turn, began telling people to call the Smiths directly if they were in need of household furnishings they needed but could not afford.

“It landed in our laps and gave us something to do,” joked Ira. “And we got plenty of exercise loading and unloading furniture.”

Before long, donations of goods outgrew the space available in the Smiths’ yard and carport. The next step was to establish and use several satellite locations around Acton, including one in a church basement. The venture was finally incorporated as an independent 501(c)(3) non-profit organization called Household Goods in 1999.

“For almost the first 10 years we did it alone, mostly,” Ira recalled. “Eventually we knew we needed more help. Letting go of doing it all ourselves and allowing others to do most of the work was hard. I still feel the urge to pick up the phone when I’m there!”

“It’s been a blessing in our lives,” said Barbara. “The amount of support we have gotten from donors and volunteers is amazing.”

The organization experienced steady growth over the next several years, which heightened the need for a single centralized location. In 2004, Household Goods moved into a permanent 10,000 square foot facility at 530 Main St. in Acton, a convenient location for donors, volunteers and clients. In 2016, they completed the goal to expand the organization’s space to occupy the building’s entire 20,000 square feet.

Household Goods has now served over 35,000 individuals and families since its founding. One of its guiding principles is to maintain an environment of dignity and respect for everyone involved. The clients range from the recently homeless to victims of domestic violence or fire, veterans, and the disabled.

Three decades after the organization’s founding, the Smiths, who are now in their late eighties and have been married for 65 years, are still volunteering at Household Goods. Until Barbara had surgery recently, they were at the facility for half the day, six days a week. Ira has still been going nearly every day for at least a few hours during Barbara’s recovery, and she remarked, “I’ve been away seven weeks. I think in another week or so I’ll be ready to go back, and eventually resume my regular schedule.”

Along with all of the regular volunteers, Household Goods also has a small professional staff and a dedicated board of directors. Each year, it distributes $2 million worth of home furnishings to families in need. Over 800 volunteers commit over 30,000 hours of their time, working with over 300 social service agencies to help 2,500 families from more than 150 towns throughout eastern and central Massachusetts have a comfortable and well-furnished home.

“The community of staff and volunteers at Household Goods is fabulous,” Barbara said. “What I love about it is that it’s never the same thing, there’s always a surprise when we go there. It’s a utopia because everyone who is there wants to be there.” 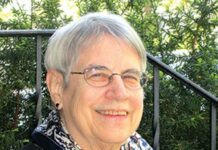 Committed to helping others: Ruth Whitney, a connected woman

Margaret Gadon: Trailblazer in her field

For many facets of community, pandemic’s impact includes food insecurity