Newton –  For Adam Pertman, nothing can compare to writing about adoption. Not the fall of the Berlin Wall, the O.J. Simpson trial, the Gulf War, or the Oklahoma City bombing; all events that he covered as an editor and senior writer at the Boston Globe.

Pertman found his passion – his life’s work – writing his Pulitzer Prize-nominated 1998 Boston Globe series, “Adoption Revolution”. He peeled back the then-closed curtain on the stigma of adoption, the shame felt by birth mothers, biological fathers’ rights, lack on uniformity in state laws, trends towards open adoption, and the role of counselling, among other issues.

“I had a wonderful career at the Globe, but nothing hit a nerve for me like this before. We hadn’t paid attention and didn’t understand the impact of the subject… there was a culture of secrets and shame. You don’t achieve good practice by covering up,” said Pertman.

For Pertman, it was deeply personal, as he and his wife, Judy, were unable to have children biologically. The couple’s two sons, Zach, now 25, and Mason, now 22, were adopted as infants.

“Before then, I knew nothing about the subject…there was no adoption in my family that I’m aware of. I’m an immigrant kid. My parents and their four kids came over (from Poland) in 1958. There was no context for it at all,” said Pertman.

He made it his business to learn all that he could.

During his tenure at the Globe, Pertman took a leave and wrote “Adoption Nation,” his ground-breaking book published in 2000.

As he wrote the book he “estimated that 100 million people have a direct connection to adoption, not including foster families and families of origin,” he said. An updated edition of the book was published in 2011.

Pertman returned to the Globe as a children’s and family reporter. During that time, he found himself pulled towards the issue of adoption. His expertise was sought by numerous reporters and researchers, and he appeared on Oprah, The View, and many other television shows.

“I was a legit adoption expert, and that put me in an awkward position. I quit my job at the Globe without a safety net,” said Pertman. He devoted himself to improving policy and practices relating to adoption.

Pertman is now the CEO and president of the National Center on Adoption and Permanency (NCAP), which he founded in 2014. Prior to that, for over a decade, he was the executive director of a thinktank, the Donaldson Adoption Institute.

“We created a unique research policy and practice model, and a unique way of packaging in ways that was informed by my journalism,” he said of his work at Donaldson. “We did papers on birth mothers and how to mitigate their pain, on open adoptions, on gay and lesbian adoptions, and on access to birth certificates…our research changed the way adoption is done.”

At the NCAP, Pertman is focused on permanency as well as adoption.

“Every child needs permanency, in their original family if possible, in foster care, if necessary, for a time, and in a new family if that’s needed,” he said. “Our mission is to do better for these kids.”

According to Pertman, the number of adoptions has remained steady, but the breakdown by type has changed. He estimated there are now 120,000 adoptions annually, including 14,000 voluntary domestic infants, 5,000 international older children, 60,000 from foster care, and 41,000 by stepparents and other relatives. This represents a significant drop in infant and international adoptions, and an increase in foster care adoptions.

“Kids coming from foster care have been removed from their families due to abuse and neglect. This is not a voluntary situation. Many of these children have special needs and have suffered from early childhood trauma. We need to establish a new system that provides support and counseling for these adoptees and their families,” Pertman said.

Surrogacy, DNA testing, and the internet has created a new world.

“The same mistakes are being made,” Pertman noted. “Adoption is the prism through which people can understand how families are changing.”

As for his family, Pertman said that his mother’s first comment to him when he told her of Zach’s adoption was, “All right, now you can worry for the rest of your life.”

And his father asked, “You’re not going to tell him, are you?”

As would be expected, Pertman and his wife did tell their children that they were adopted -“On the way home in the car.”
For more information visit www.nationalcenteronadoptionandpermanency.net and on Facebook. 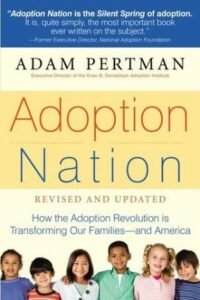