Boston/Framingham – David O’Leary began his longtime career as a radio/television personality at Boston-area stations soon after graduating from Natick High School in 1979. Now residing in Framingham, he has worked at Magic 106.7 since 2004. He has also volunteered for over 20 years in various capacities with the American Foundation for Suicide Prevention (AFSP), now serving as board chair of its Greater Boston chapter.

O’Leary has a personal connection with the cause. His cousin Paul died by suicide at age 29 in 1995. Paul had worked as an officer for the Bristol County Sheriff’s office and a call firefighter for the Wareham Fire Department. Learning of the suicide evoked mixed emotions for O’Leary.

“I was sad, confused and a little bit angry at Paul,” he shared. “I didn’t know that he had struggled with any kind of mental illness. It was such a shock to the entire family. Many people who lose someone to suicide say they had no idea.”

Soon afterward while working as the WBOS public affairs director, O’Leary became aware of AFSP through a public service announcement that he received and aired. He subsequently participated in the Greater Boston chapter’s fundraising walks, joined its advisory council and board of directors, and ultimately became board chair.

This past January, the local chapter was named 2018 Chapter of the Year at AFSP’s 14th annual Chapter Leadership Conference in Dallas. Each fall, the chapter consistently organizes one of the country’s most successful Out of the Darkness Walk fundraisers.

Additionally, each summer the national foundation chooses two host cities for the larger-scale Out of the Darkness Overnight Walk with a route typically spanning over 17 miles. Boston was chosen as a host city in 2010, 2015, and again this year.

“Walking overnight and finishing as the sun rises is symbolic,” he explained. “Our walks are called Out of the Darkness because we’re trying to bring the conversation about mental health and suicide out of the darkness, to remove the stigma that so often surrounds this conversation. It’s a fundraiser for the foundation, but also a chance to bring together thousands of people who share some connection to suicide or mental illness.”

Fundraisers support programs offered free of charge including “It’s Real” for groups consisting of college or college-bound students with their parents, as well as college faculty and support staff. Among other programs is “Talk Saves Lives,” a presentation for various audiences including schools, workplaces and at-risk communities. AFSP also invests substantial funds in research to save lives, O’Leary noted.

“We’re the largest nonprofit funder of suicide prevention research in the country,” he said.

“The mortality rate goes down when money is spent on finding solutions for heart disease, diabetes and so many other public health crises. AFSP will fund over $5 million this year in suicide prevention research, which is long overdue and much needed.”

Whether advocating on radio airwaves or participating in fundraising walks, O’Leary appreciates his volunteer opportunities for AFSP.

“Our mental health is as important as our physical health,” he said. “I’m not alone as someone who struggles from time to time with depression. I’m happy to help spread the word that it’s OK to not be OK, to struggle a little bit with mental health issues and to encourage people to get some help.”

For more information about AFSP Greater Boston chapter, visit afsp.org/chapter/afsp-greater-boston and facebook.com/AFSPboston; for Boston’s Out of the Darkness Overnight Walk, visit theovernight.org. 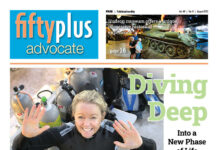