Boston – A native of West Hartford, Conn., Jim McCue decided in the late-1980s to pursue a stand-up comedy career and considered moving to either Boston or New York City. He chose to make Boston his home base and now performs regularly in NYC. As founding producer of the Boston Comedy Festival, he has also attracted many other comedians and their fans to Boston annually since 2000.

After studying business administration and management at Eastern Connecticut State University, he experimented with stand-up comedy at open mic nights in his home state. He moved to Boston in 1990 and landed his first paying gig as the opening act for comedic performer Ben Powers, best known for his role on the CBS-TV sitcom “Good Times.” It was an opportunity for McCue to learn how to effectively play to his audience.

“Bostonians are both blue collar and educated,” he noted. “When I started performing comedy back in the 1900s, all Bostonians on average read two newspapers a day. You’ve got guys from Harvard, MIT and TUFTS, as well as union guys and city workers. Boston is a sports town, so they apply this competitiveness to comedy. You can mix all of these different elements to get laughs. And they’re not forgiving – you need to bring it to every single show. It toughens you up for all different kinds of audiences.”

Additionally, McCue has applied lessons learned from his business studies to working in the entertainment industry behind the scenes.

“Everything you learn can be applied to comedy and promoting it,” he said. “As a comedian myself, I’m a subcontractor, a one-man company. I do the bookings, write the material and plan my own travels. With the comedy festival, I do much of all that for about 100 comedians.”

McCue relocated to NYC in 1995. While performing the comedy club circuit in NYC and beyond, he appeared on television shows including “An Evening at the Improv” on the West Coast.

Since 2000, he has entertained U.S. military troops at over 100 bases domestically and worldwide including Bosnia, Japan, Korea and Kosovo. McCue authored “Embedded Comedian,” which he describes as “a field manual for comedians in a war zone.”

“The military became aware that comedians are very portable – we don’t need a lot of equipment,” he said. “I’ve become such a big fan of the troops.”

Also in 2000, McCue moved back to Boston to launch his ever-evolving comedy festival. The festival now runs four days at several venues and headlines well-known acts along with 48 contestants vying for the top prize of $10,000. Some of the festivals have also featured funny films.

“It’s always changing every year,” McCue noted. “We have new, up-and-coming talent from all over the world. On top of that, we always have very well-respected, big-name acts. It’s a good mixture of both. We get a lot of support locally.”

For the past several years, the festival’s success has spawned year-round tours throughout New England known as “Best of the Boston Comedy Festival” and other titles.

Contestants’ submissions are now being accepted for the 20th annual Boston Comedy Festival to be held Wednesday, Nov. 13, through Saturday, Nov. 16. McCue appreciates the chance to annually reconnect with his many comedic colleagues.

“The most fun about being a comedian is hanging out with other comedians,” he said. 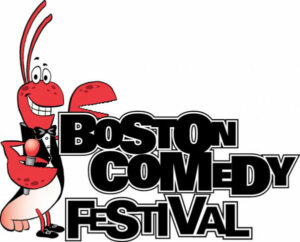 Does a child you know and love have selective mutism?