Newton – Don’t let anyone tell you that you can’t change careers paths midlife and achieve your dreams. Linda Driscoll of Newton took a chance, shifted course and exceeded her expectations.

Driscoll is the founder, president and CEO of the Newton-based nonprofit organization Dream Big! Launched in 2010 the organization has helped over 30,000 girls from low-income families through equipment and uniform donations, scholarships, sports clinics and the annual Dream Big! Leadership Conference for female student athletes.

A Newton native, Driscoll has played sports all of her life. Now 55, she has had a career that has intertwined sports and nonprofit management including work with Special Olympics, the National Kidney Foundation, the Massachusetts Amateur Sports Foundation and the Red Cross. However, she knew early on that she wanted to start her own nonprofit.

While developing a girls’ sports program with the Women’s Sports Foundation, she had her epiphany.

“One of the women I worked with, who coached a girls’ basketball team, was asking for uniforms,” Driscoll recalled. “She explained that they play immediately after the boys’ games and would go into the locker room after the boys changed out of their uniforms and put them on.”

The team was from an inner city and they just didn’t have the $600-$800 to purchase uniforms.

“Girls were literally not participating because they couldn’t pay the program fees, didn’t have the right sneakers or equipment and games were cancelled because girls couldn’t afford the $15 shin guards,” Driscoll explained. “Sometime it was about access. They didn’t have the $15 and they didn’t have a car to go get them … much less a credit card to buy them [online]. There were barriers that existed.”

She spent the next six months interviewing everyone from athletic directors to athletes and soon realized the issue was much bigger.

“I’ve played sports my whole life and I knew the impact that it had on me growing up,” she said. “Research has shown that many women in high positions played sports and because of that they can work as a team, have self-esteem and learn how to win and lose – all benefits of playing sports.…Girls that play sports are more likely to go on to college and less likely to have teen pregnancy.”

Driscoll’s contacts from athletic and nonprofit spheres have been beneficial. She knew how to fundraise. In her first year she was able to help 1,500 girls. The organization was run out of Driscoll’s living room. By the third year, Dream Big! was picked up as a partnering charity of the Boston Marathon which helped put them on the map.

When asked if she thought she would be running a nonprofit in her 50s, Driscoll replied, “I envisioned I’d be doing something like this. I love the world of giving back and I feel there is so much that can be done…but to know I’m impacting girls and young women’s lives through sports is really meaningful for me.”

She added, “We are not just giving kids tools to play, but are giving them tools to get them through high school, and into college, and we are using sports as a tool of empowerment.” 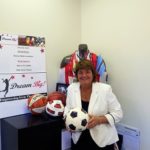