Cohasset/Westborough – Luanne Crosby, a Cohasset native now of Westborough, has performed various musical styles at countless venues as a singer, musician and songwriter throughout several decades. Her interest in performing began with a childhood dream of getting discovered.

“As a kid, I would fantasize about singing on the lawn of the South Shore Music Circus,” she recalled of her hometown landmark. “Someone inside would hear me, think I was wonderful, come out and put me in a musical.”

Instead, she debuted in a town talent show at age 4, learned to play guitar while attending camp at 6, figured how to write her own songs by 12, and landed her first paying gig at 18 at Norwell’s Ground Round Grill & Bar.

Crosby became a more experienced musician when her family spent summers on Nantucket. There, she performed regularly at the circa-1960s Establishment Coffeehouse. Also, her impromptu guitar strumming while on downtown streets attracted audiences.

“You don’t need a stage,” she said. “I love being able to bring music wherever I go. It’s an instant unifier.”

The then-folk singer broadened her repertoire to include jazz and rock. A 1980 move to Boston led to bookings for The Luanne Crosby Band. Beginning in 1984, she lived and performed throughout Germany with a new band, Luanne Crosby and the Lifeline, and honed her songwriting along the way.

“Everybody in Germany expected you to play originals,” she noted. “As a result, I was able to play my own music and have a fantastic band that I could write songs for.”

Since 1989, Crosby has called Westborough her home. She helped Westborough observe its 300th anniversary in 2017 by writing “The 100th Town,” which she sang at many celebratory events.

As another birthday gift to Westborough, she and her partner, R. Christopher Noonan, conducted a series of walking architectural tours. Self-accompanied on ukulele, Crosby provided a live soundtrack for the tours consisting of songs relevant to the built-in environment. They plan to continue tours quarterly in conjunction with the Westborough Public Library.

Up until 2008, Crosby performed with a band. She downsized her act after receiving a ukulele that year as a Christmas gift from her daughter, Anya Olsen. Now, Crosby performs solo with a guitar or ukulele.

“I decided that it’s time for me pedal back and do music in a different way,” she shared. “Now in my early 60s, I do things differently than in my rock ‘n’ roll days, but I still get the same satisfaction from performing as I did touring Germany in my 30s. I’m doing more community work now.”

Crosby frequently brought her ukulele when visiting her mother, Liz, at the Beaumont Rehabilitation and Skilled Nursing Center at Northborough in 2012. Her mother lived there for several months after she suffered a stroke and developed memory problems. Yet, she remembered the lyrics of songs her daughter performed for her.

“I played all the ‘60s songs that she loved – Simon & Garfunkel, and Peter, Paul & Mary,” Crosby relayed. “She sang along or at least mouthed the words. She told me, ‘I love it when you play these songs. It makes me feel like I still have a brain in there.’”

Her mother passed away October 17, 2012. Since then, Crosby has performed nearly every Sunday afternoon at Beaumont.

“I do it for myself as much as for the residents,” she said. “I come out of there feeling so much better. Bringing joy to people is incredibly fulfilling. How can you not feel good about doing that?”

For more information about Crosby, visit luannecrosby.com and on Facebook at facebook.com/LuanneCrosbySongster. 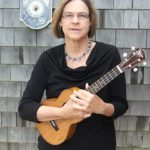