Take heart, all you baby boomers who have let the years pass without a commitment to toning your abs and thighs or challenging your cardiovascular system.

In a Montgomery County office park, a small band of product developers at Smooth Fitness L.L.C. has your back. Your glutes, too, and anything else on your aging frame that might need some help.

“It’s not because I’m 54,” said Rich Hebert, the 6-foot-3, 195-pound CEO of the King of Prussia exercise-equipment company that trades as Smooth Fitness & Health. “This is a great target market and this is an underserved market.”

And, Hebert contends, it is a promising route to one of his company’s primary goals: improving its own fitness in an industry that most definitely is not for wimps.

Can a treadmill desk save your life? 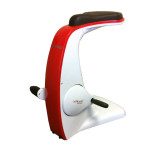 It’s a fad-oriented business, where alternative functional fitness forms such as Zumba, Beachbody and P90X have “cut in half” the traditional fitness market, Hebert said.

In 2011, Hebert, who had spent 25 years in direct retailing, was hired by NewSpring Capital in Radnor to position InternetFitness.com for sale. Larsen MacColl Partners, a Radnor investment firm, acquired the assets in December 2012 for an undisclosed amount, creating Smooth Fitness and staking its future on the generation of an estimated 76 million, whose oldest members are now 68.

Along with traditional high-end fitness equipment — elliptical machines, treadmills — Smooth Fitness has begun rolling out lower-priced items such as stationary bikes and a push-up device “to help people who have been inactive, or no longer have strength and flexibility for traditional equipment,” Hebert said.

The company, which once employed 50 or 60, is down to a payroll of 15. Call center, warehousing and logistics operations have been outsourced. Manufacturing is done in Asia.

Smooth Fitness’ first boomer product, SitNCycle, launched in June 2012 to robust sales on television, the Internet and through direct advertising, Hebert said. Unlike a typical stationary bicycle, the patented SitNCycle is lightweight, has no handles (so the rider is forced to use his or her core to stay balanced) and has relatively low resistance settings.

“We’re selling hundreds of thousands of these,” said Hebert, as he pedaled through a recent interview, attributing a 10-pound weight loss over six weeks to “just using this when I’m on the phone.”

As part of its new fitness-health-wellness platform, Smooth Fitness also will be manufacturing and selling home environmental products, such as air purifiers and portable heaters, as well as direct marketing vitamins and supplements.

A second generation of the SitNCycle, more recumbent and with a better-padded seat and wider pedals, premiered in February on QVC for $219, and is available at www.getsitncycle.com.

Smooth Fitness also has worksites in its sights. Because there are plenty of boomers expected to be working for years to come, the company will soon hit the market with a low-speed treadmill desk for $999.

“We predict . . . you will see workplaces over the next 10 years totally transformed with workstations that facilitate physical activity,” Hebert said.

In the future that he envisions, conference tables won’t be piled with doughnuts, but rather lined with SitNCycles.

Victor Tringali, a former champion bodybuilder, said he is pleased with the company’s focus on baby boomers. Tringali is the director of an initiative promoting healthier choices among students, faculty and staff at Drexel University.

“It’s a large demographic and it makes sense to target that audience,” said Tringali, who has advised Smooth Fitness on conditions it needed to keep in mind in creating products for use by baby boomers. They included orthopedic problems and arthritis.

He also helped the company develop a cross-training program.

The end result should not only be trimmer waistlines but smaller health-care bills, Tringali noted.

“Anything we can do to encourage being well and suppress illness of any kind is certainly going to have a positive impact on our medical costs,” he said. AP/The Philadelphia Inquirer