When my mother gave me an age-softened novel called “The Woman-Haters,” I was not excited about reading it, being a woman. But I needn’t have worried. The author was Joseph C. Lincoln. In his novels, nobody really hates anybody.

Most people haven’t heard of  Joseph C. Lincoln, and I hadn’t, either. But after that first novel, he became a guilty pleasure.

Lincoln was born in 1870 and raised on Cape Cod. Between 1904 and 1943, he wrote about 40 novels, as well as poems and short stories, centered in fictional Ostable county on the Cape. His novels are full of quirky, likable, funny, and memorable small-town Yankee characters. He was enormously popular in the first half of the last century.

My mother knew his books because, when she was young, her grandfather bought them, read them, and passed them along to her. 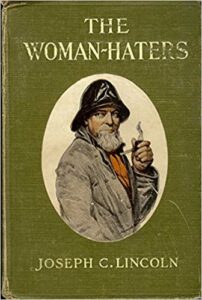 In “The Woman-Haters,” published in 1913, an older gentleman, once disappointed in love, isolates himself in a Cape Cod seaside cottage. One day on the beach, he finds a younger man, nearly drowned, who has “fallen” off a steamer to escape the fiancée his family has chosen for him. The older man invites the younger to stay with him. Then, who should move into the neighboring cottage but the older man’s former love and a beautiful young woman. You can guess how it ends. Lincoln’s novels have only happy endings. The fun is watching the story unfold.

(In 2009, this yarn became a movie, “The Lightkeepers,” starring Bruce Dern, Richard Dreyfuss, Blythe Danner, Julie Harris, and others.)

Once I read “The Woman-Haters” I was hooked and went looking for more. I found no Joseph C. Lincolns in the library. A few are available online. Secondhand book shops are the best bet and I discovered one shop that had a pile of them. I’ve read 22 of the novels.  I carry my list with me everywhere, in case I stumble upon some I haven’t read.

I call Lincoln a guilty pleasure because, as a relatively educated person,  I feel as if I should be reading Great Literature. By Famous Authors. On Serious Subjects. I’m guessing that Lincoln’s books aren’t required reading in any institution of higher learning. No book reviewer ever says, “This new author will remind you of Joseph. C. Lincoln.” You don’t see his name among quotations by famous writers.

But if you’re a reader, sometimes you just need an absorbing story with loveable unusual characters, a clever plot, a happy ending, no graphic sex or violence, nothing to cause you anxiety about the Meaning of Life, nothing to keep you awake at night.

A so-called “guilty pleasure” is one that probably doesn’t quite fit your self-image, the image you might like to present, or the image others have of you – sort of like growing up in a household where classical music is The Thing and you go along, while knowing that, in you heart, you much prefer Country. Or vice versa.

Mr. Lincoln has taught me that if I enjoy something and it hurts no one, there’s no real “guilt” in guilty pleasure. So here I am, publicly confessing that I’m not quite as cultured as perhaps I should be and, further, confessing that I don’t worry about it. I like what I like. Each one of us is a mass of contradictions anyway.

Since I began reading Joseph C. Lincoln, I’ve met three other fans, more than I would have expected of an author long dead whose books will never be considered classics. I’ll bet we’re not the only ones with this not-so-guilty pleasure.