REVERE – Nancy Barile teaches English to some tough kids at Revere High School, but she’s not easily shocked or intimidated. The award-winning educator and Revere resident shed her Catholic school girl roots to become a punk rocker in her late teens.

By her early twenties, she was also managing a band called the Sadistic Exploits and organizing and promoting concerts by major hardcore punk bands like Black Flag and Minor Threat. With her spiky blonde hair and heavy eyeliner, black leather jacket adorned with the names of her favorite bands, torn jeans and tattered sneakers, she had come a long way from her cheerleading and Girl Scout days.

From affluent suburbia to inner-city grittiness

“I grew up in a mostly white, affluent area, and punk rock introduced me to a diverse and multicultural world,” said the 61-year-old, who was raised in East Norriton, Pennsylvania, a Philadelphia suburb. Now she’s shared her experiences from her adventurous younger days in a recently published book called I’m Not Holding Your Coat: My Bruises-And-All Memoir of Punk Rock Rebellion. Released by New York City publisher Bazillion Points, which specializes in punk and heavy metal-related books, it sold out of its first printing on pre-orders alone before the official publication date early this year. 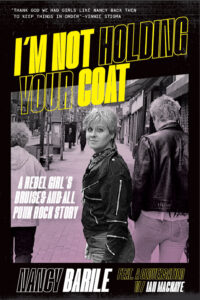 Barile moved to downtown Philadelphia in the early eighties after getting a job there as a paralegal. The city had an aggressive, male-dominated punk music scene, but she held her own.  “Punk rock taught me the importance of taking a stand and working to make a positive difference in the world,” she explained. “Punk’s do-it-yourself work ethic is something that affects every aspect of my life to this day.”

Life lessons for her students

And it’s these lessons she believes that help her better understand and teach her students today. “Punk rock has helped me to connect with and reach the disenfranchised and marginalized teen — mainly because I was one and so were my friends,” she recalled. “I do remember what it felt like to not feel ownership in my education or my school. I remember what it was like not being able to connect to my learning. As a teacher, I try to keep that in mind every single day.”

Despite being able to relate better to her students than some teachers, Barile also acknowledges the greater challenges they have faced. “Many of the teenagers I work with have survived and overcome enormous adversity,” she noted. “They have escaped starvation, poverty, violent countries, wars, and tremendous obstacles. They are incredibly resilient and strong, but in many cases, they have experienced trauma. They have a much larger worldview than I ever did.”

A new beginning in Boston

The punk music scene was also what ultimately brought Barile to the Boston area. It started when she reached out to Al Barile, the guitarist and leader of SS Decontrol, one of Boston’s hardcore punk bands, about booking them for a concert in Philadelphia. Through their shared love of the music, they started talking frequently on the phone and meeting up at shows in New York City and other locations on the East Coast. In 1982, Barile moved to Boston, and seven years later, they married.

Barile continued the college education in Boston she had begun in Pennsylvania, eventually earning a master’s degree in education and beginning her teaching career. In addition to teaching high school students for over 25 years, she has also been an adjunct professor for over a decade at Emmanuel College in Boston, training the next generation of educators. But the rebellious attitude that blossomed in the loud and chaotic punk clubs of Philadelphia and New York continues to simmer, despite her professional achievements. “I still question authority ― a fact that, even at my age, gets me in trouble from time to time,” she joked. “Punk rock taught me not to be manipulated for the sake of someone else’s personal agenda. I refuse to blindly follow the directives of leaders who attempt to compromise my integrity or the integrity of my students.”