Some stories start with a blink of an eye. For Cheryl Malone’s award-winning picture book “Dario and the Whale,” that blink happened in 2011 on a cool foggy April morning. Malone was attending a month-long residency at the Norman Mailer Writers’ Colony in Provincetown, along with Chief, her Wheaten Terrier.

“We were walking along the beach and could see a young whale feeding on the surface,” Malone recalled. “Chief barked and the whale picked up his head and looked at us. The whale, the dog, and me. It was unbelievable.”

“Dario and the Whale” was published in 2016, followed by “Elephants Walk Together” in 2017. Both are available on Amazon. Before becoming a published author, Malone had traveled the world, worked as a successful biotech lawyer and a dog trainer, and for a time was a single parent. 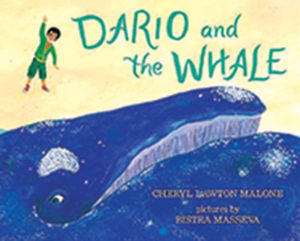 Born in New Jersey, she never lived there. Malone was raised mostly in Europe.

“My parents moved 19 times and lived all over the world,” she said.

She attended the American School in London. At 18, with one suitcase, she flew to the United States to attend Lehigh University.

“I hadn’t been in the States in a couple of years at that point. I thought that I was a European,” she commented.

At Lehigh, Malone followed the footsteps of her father, an engineer, but found her niche in political science and international relations. Next came law school at Suffolk University in Boston.

“Achieving goals was important in my family,” she said. “The skill set for law came to me more naturally than engineering.”

After graduating from law school in 1985, Malone was hired by the then oldest law firm in Boston. By 1989, she had been married for four years, had a son, and was living in Newton. And then the firm dissolved.

Over the next 25 years, Malone applied her legal expertise at a clinical lab company, a medical device start-up, and a biotech research company. In every case, she dealt with complicated issues and rose to the top. Also, in every case, the company was sold. Her final biotech legal stint was as a consultant.

On the personal side, in 1996, Malone left a difficult marriage. Her son was 8 and by then, she had a daughter who was 5. Malone found comfort living in Newton.

“My kids grew up running in and out of our neighbors’ [homes],” she said. “Our street is so diverse. When someone had a birthday party, there would be songs in 15 languages. It was so comforting to me given how I grew up.”

“He is an extraordinary guy who went into an orphanage at the age of 5 and was adopted at 9. If anyone can understand someone else’s children, it’s someone who was adopted,” she said. “His son was 15 when I met him. Now he’s 36 and he is a son to me.”

Malone had always wanted to learn how to write fiction.

“It’s like learning to paint or play an instrument,” she noted. “There are rules.”

With her husband’s encouragement, Malone gave up law and earned an MFA in creative writing from Lesley University in 2010. Afterwards, she taught at Lesley for four years, where she “really honed [her] skills.”

Chief, the dog who barked at the whale, came into Malone’s life in 1999. He had chronic health problems and died at 8. A few years later, Malone and her husband travelled to Ireland and brought home Lorcan, an Irish Wheaten Terrier.

“He is the easiest dog on the planet,” she said. “We went back to get another dog, Muri. It turned out that she is a pill, so pack oriented, shy, nervous, anxious, and all about rules.”

That’s when Malone met Lisa Rockland, now owner of All about My Dog in Natick, who was helping her train Muri. When Rockland opened her business in 2016, she asked Malone to help her launch her business and Malone became a dog trainer.

Currently, however, Malone is focusing on creative writing and is working on a middle school chapter book and an adult murder mystery. It seems she has many stories still to tell.

Does a child you know and love have selective mutism?