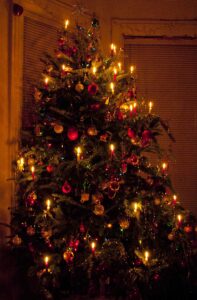 Every Christmas, I say, “Maybe this year, I should have a real tree instead of the artificial one.” Every year, I don’t.  That artificial tree is a family tradition.

The first Christmas of our marriage, my husband and I installed a real tree. Just after Christmas, we both came down with one of those horrible colds that make your head feel like a watermelon on a stick. After a couple of days in bed, I dragged myself to the living room to check on the tree. Neither of us had felt well enough to water it.

Too lacking in energy to fetch the vacuum cleaner, I found the dustpan and brush. Simple enough, I thought, to sweep up the needles.

The synthetic brush, scuffling on the synthetic carpet, created static that awoke the slumbering needles. They allowed themselves to be swept into the dustpan. But they suddenly woke and compulsively jumped back out, adhering themselves to the carpet in an impressive display of static cling. The more I brushed, the more they clung. Being a person of common sense, I went back to bed.

In my viral misery, I vowed that we would never again have a real tree.

I know that this is unfair to real trees. Many families enjoy real trees that make it through the whole season with no needles-on-the-rug disasters.

But it doesn’t seem like Christmas unless I assemble that tree, poking the ends of make-believe branches into corresponding holes in the make-believe trunk. It is not true, as poet Joyce Kilmer wrote, that “only God can make a tree.” I can, too, sort of.

Probably the real evergreen trees around our house shake their branches in disgust when they peer through the windows  and see a tree-like structure that grew, not from the soil as they did, but from the primeval ooze that became petroleum that became plastic that became needle-like objects twisted into metal stems.

Those real trees must admit that I’ve tried to include them in Christmas traditions. But they have a fatal flaw: they grow.

When we moved into our house 17 years ago, a single baby balsam, only 18 inches high, nestled among the tall grasses in the small field behind the house. When that tree grew to be about four feet tall, I decorated it with bright red Christmas tree balls. I tied a velvety bow on top. The tree looked both regal and cozy out there in the field, all by itself, against the backdrop of grown-up evergreens at the edge of the woods 40 feet away.

When the little tree was five feet tall, it was a perfect Christmas tree. Then it was six feet tall. I had to reach up to bend the top toward me so I could place the bow. The ground around the tree is too uneven for a ladder. So when the tree reached seven feet tall, it had to retire from its relatively short career as a Christmas tree.

It stands there now, still regal but no longer cozy, probably 25 feet tall, completely undecorated. At Christmastime, it seems a bit sad, perhaps missing its bright red balls, and perhaps just a bit jealous of that gaily-bedecked phony it views through the living room window.

Spring cleaning and the dusty mind