It’s only March, but we all need time to get ready. April 1 is the beginning of National Grilled Cheese Sandwich Month. This is no April Fool joke, especially for those of us who take our grilled cheese sandwiches seriously.

I haven’t been able to learn who started this worthy annual celebration, a whole month dedicated to grilled cheese, or when it started. I googled  — come to think of it “google” sounds a little like a grilled sandwich bubbling on a griddle – I googled “history grilled cheese sandwich month” and found 5,690,000 results. Not expecting to live long enough to check nearly 6 million comments, I speculate that the celebration’s beginnings are lost in the mists, or frying pan fumes, of time. 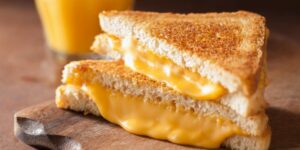 A good traditional grilled cheese sandwich is crispy on the outside, gooey on the inside. In classical mode – developed when you buttered the bread so the sandwich wouldn’t stick to the griddle – it’s greasy. You have to lick your fingers. Non-stick pans enable you to make neater sandwiches. If you must.

Poking around on the Internet for sandwich recipes, I was appalled to see some of the barbarous and sacrilegious ingredients with which chefs mutilate the sandwich’s simple perfection: peppers, leeks, potatoes, roast beef, crab, tuna, meatballs, marmalade.

According to Kraft Foods, 33 percent of Americans want only cheese in their grilled cheese sandwiches. Favorite additions after that, says Kraft (and who knows grilled cheese better than Kraft?) are ham, bacon, turkey, tomato, onion, avocado.

I am with the 33 percent who want only cheese, with one concession: tomatoes. I agree with 20 percent of Americans about that. Perhaps that’s because some of my earliest childhood memories of comfort food involve lunches of grilled cheese sandwiches with tomato soup, still my favorite meal. My brain’s flavor center is programmed to love the combination of cheese and tomatoes. (But don’t you dare come near my sandwich with that ketchup bottle.)

It’s not clear who invented the grilled cheese sandwich, but similar recipes appear in the cookbooks of ancient Rome. It stands to reason: there’s bread, there’s cheese, there’s fire. Bingo.

Apparently the modern grilled cheese sandwich became popular in the 1920s, but was usually served open-faced. According to Kraft, the top slice of bread was added in the 1960s. I dispute that, since the two-slice tradition was well established in our family a couple of decades before that. Perhaps we were in the vanguard, because who am I to argue with Kraft.

As I write, I must confess that, while I love grilled cheese sandwiches with tomato soup, I am a lazy cook. So – at the risk of censure from others who love my favorite meal – I will share my recipe for The Lazy Cook’s Grilled Cheese Sandwich and Tomato Soup. Heat a can of tomato soup. Meanwhile, make a piece of crispy toast and cut it into crouton-size cubes. Put the croutons in a soup bowl. Cut the cheese into similar cubes (I buy cheese in a block). Put those cubes in the bowl. Pour the hot soup over the toast and cheese. The cheese gets melty, the toast gets soupy, the soup gets cheesy and crunchy, and the lazy cook gets very happy.

Things to be suspicious of

Christmas trees, real and not

Eighty five years of too many books

Mattie is with me when I vote