Northborough – Like discovering pentimento – a hidden layer in a painting – Marcia Waldman, who teaches art in the Northborough Public Schools, recently uncovered something about her father’s past by reading through a box of letters found long ago in her parents’ basement.

Mostly in small slanted script, Olive Bravery, an English woman, wrote these 175 letters to Waldman’s father Joe, who was a member of the 56th Signal Battalion of the U.S. Army. From June 7, 1944 to April 1946, they had a complicated, ill-fated love affair.

Growing up on Long Island, Waldman said that she and her three siblings knew about Olive.

She set the backstory of her father’s childhood.

“He came from a comfortable Jewish family, but things changed when he was seven when his father died,” Waldman said. “My grandmother sent my father to an orphanage because she could not support her five children. It was a horrible place where he was beaten.”

Joe left the orphanage at the age of about 13 when he taken in by a foster family. In 1941, when he was 24, he joined the Army to seek adventure, and apparently, love.

Here is part of what Olive said:

December 12, 1944 — “Maybe you and I are thinking the same thing… that it is impossible for us ever to think of being together after the war.”

Letters sent to Brooklyn — we learned that Olive is married and has two children!

February 16, 1945 — “I still don’t regret a thing we did – it’s just that my in-laws are making a fuss about the children & I think it is up to me now to do something for them… So Joe, let’s call it a day. I am really sorry to see things happen this way. We had so many dreams.”

November 28, 1945 — “I took Joan to see Chas and he brought Tony. The kids were so pleased to see each other… I am living with his people.”

In letters over the next few months, we learned that Olive was seeing S.J. Taylor, an American soldier also from the 56th Signal Battalion.

And, this is how the story ends:

April 5, 1946 — Letter to Joe in Brooklyn from S. J. Taylor — “I’m taking (Olive) back to Germany to work as a clerk for the battalion so I do hope this reaches you before you make too many arrangements. Have met the family and talked things over and all agree that Olive is doing the right thing… to set things right with Chas and file formal application for custody of Joan.”

Waldman was left with many questions:

Were Olive and Joe really married? When did Joe learn about Olive’s past? What happened to Olive’s children? Did Olive marry S.J. Taylor?

Searching the Internet provided no answers except for a photo of Joe with his 56th Signal Battalion. He is second from the left in the bottom row, with a cigarette in his mouth. Joe died in 1991, at the age of 74. And thus, Waldman will never know his take on his wartime love affair.

Putts & More: A for-profit business with a nonprofit feel 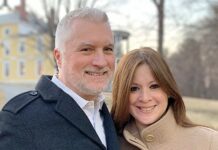 Dental health continues to be a priority with age

Grafton’s ‘Banjo Joe’ is still singing, strumming after all these years