Westborough – Growing up in the Philippine Islands, Anita Cabuhan Vidal Wales (“Annie,” as she is known to her friends) has always loved art, fashion and decorating.

Now a resident of Westborough, she graduated from the University of Santo Tomas with a bachelor’s degree in commerce, and then worked at the U.S. Naval Base in Subic Bay, Philippines, in the data processing support center.

A computer supervisor, she still found a way to use her creativity by creating wall size murals with surplus paper and plastic packing “peanuts.”

After meeting and marrying her husband Doug, who she said was her “handsome U.S. Coast Guard Officer,” she moved to Newton where the couple raised their three daughters.

It was there that she was first introduced to origami, the Japanese art of paper folding. Intrigued at how beautiful art could be created with simple papers folded into a variety of designs and shapes, she first joined the club, PINE (Paperfolders in New England) and then became a member of the national group, OrigamiUSA.

Attending her first convention, she was “amazed,” she recalled, “with the attendance of nearly 800 members, from all parts, not only the country, but the world.”

Since then, origami has become her passion, not only creating pieces for herself, but for others as well. She strived to increase her level of expertise, achieving “professional status, which means that anyone could ask me for help and guidance,” she said.

“People who love origami love to share and love to teach,” she noted.

Indeed, Wales always has paper on her, ready to make a small present for whoever is near. She teaches local classes, but has been known, she said, to also instruct wherever she may be, including seatmates on plane rides.

“I always have paper on me!” she laughed. “My hands are always busy creating! And it’s inexpensive – I usually just get a small cube of paper at Staples and use that.”

After retiring from corporate life, she and Doug moved to the Walker Meadow development in Westborough. Recently she displayed some of her origami creations at an exhibit displayed in the clubhouse there. Colorful pieces of paper were creatively folded into blossoms, birds, a variety of shapes, unique greeting cards and even small boxes. For the exhibit she mounted her work on corkboards and created paper frames for each piece.

Currently she teaches a monthly class at the Northborough Senior Center and has, in the past, taught classes at local libraries, to senior groups, church groups, Girl Scouts, and even at her husband’s school and college alumni gatherings.

She has even taught the art at teas and showers.

“The wonderful thing is that anyone can do origami, both men and women, and all ages,” she assured. “It’s fun and relaxing.” 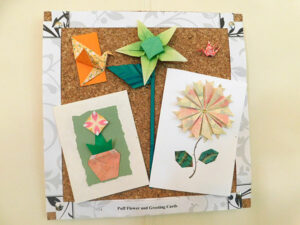 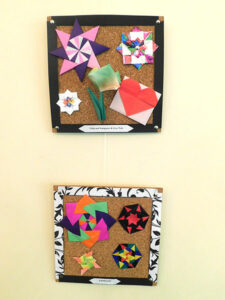 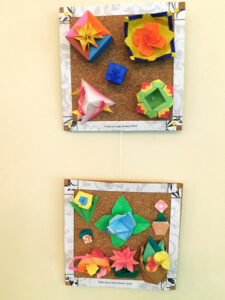