Boston/Cambridge – 2019 is a year of milestones for Boston resident Peter DiMuro, executive artistic director of the Dance Complex in Cambridge. In addition to turning age 60 this past March, he’s celebrating his 40th anniversary in a diverse life of dance with new projects underway.

His 60th birthday party was good-naturedly titled “Even a Guy with Two Left Feet,” inspired by lyrics crooned by song-and-dance actor Danny Kaye in the film “White Christmas.” DiMuro relates to the lyrics when reflecting on his childhood in Illinois.

“I grew up in the Midwest where boys didn’t dance in the ‘60s and ‘70s,” he recalled. “I was chubby and not athletic. Everything was against me, but I yearned to dance like the guys in the Ernie Flatt Dancers on ‘The Carol Burnett Show.’”

DiMuro got the chance to dance in musicals while majoring in theater toward a bachelor’s degree at Drake University in Des Moines, Iowa. He followed a teacher’s advice to study summers at the American Dance Festival at Duke University in Durham, N.C., which he attended five consecutive seasons. Additionally, he earned a master’s degree in dance from Connecticut College in 1983.

A move to Boston in 1984 led to several years of performing with dance companies, teaching at Boston Conservatory and Emerson College, and serving as artist-in-residence at Tufts University.

In 1993, he once again attended the American Dance Festival where he studied with Liz Lerman, founder of the Dance Exchange located at the time in Washington, D.C. She hired him immediately as a performer, and ultimately as artistic director from 2003 to 2008.

“Liz’s approach to art is very collaborative, as is my work now,” DiMuro explained. “She had a core company of dancers ages 20s to 70s. We worked with black and white, and straight and gay teams from around the world. I tried to uphold Liz’s belief that everybody can and should dance, and there’s dance in every moment of life.”

After directing Dance Metro DC from 2008 to 2012, DiMuro returned to Boston and began his current job in 2013 at the Dance Complex in Cambridge. He oversees its hosting of local and regional dance companies’ performances, workshops, and classes for children and adults.

“The Dance Complex is such a rare entity to have both professional and recreational dancers under one roof,” he noted. “The three pillars for me are the creation, study and performance of dance. We try to make sure that everybody has the opportunity to do all three there.”

His current creative umbrella, known as Peter DiMuro / Public Displays of Motion (PDM), features dancers age 16 to nearly 70 including some living with physical disabilities. The dance company has performed on stages ranging from the Hatch Shell at Boston’s Esplanade to the intimate Pontine Theatre in Portsmouth, N.H.

“While these dancers do superhuman things – multiple turns, drops to the floor and jumps in the air – the core of the work is their human relationships,” DiMuro explained.

Boston’s Isabella Stewart Gardner Museum became a unique venue for PDM throughout 2018 when DiMuro was named its first choreographer-in-residence.

“The series of collaborations is giving me a zeal to create more,” he said. “I’ve found ways to reinvent myself at each stage of my life, as well as reinvent what I do in dance.” 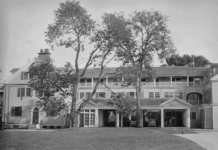