Boston/North Grafton – Congenital heart defect (CHD) survivor Kim Edgren of North Grafton strives to raise awareness and funds for the Adult Congenital Heart Association (ACHA). Founded in 1998, ACHA is a national nonprofit organization dedicated to the needs of 1.4 million adults who were born with CHDs. Edgren returned this year as chair of its major fundraiser with a new event name and venue.

Now known as Walk for 1 in 100, the ACHA fundraiser will take place Saturday, Sept. 21, beginning at 9 a.m., at Franklin Park Zoo in Boston.

“Having survived CHD my whole life, I really want to give back to the community,” she said. “We need more awareness because a lot of people don’t know what CHD is. It’s the number one birth defect and it’s a lifelong illness. We walk to provide support and empowerment for those one in 100 people affected.” 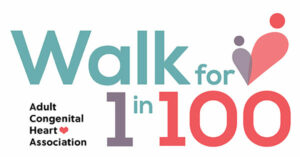 Several years ago, Edgren attended a conference where she learned about the Congenital Heart Walk held in a number of cities nationwide since 2010. She chaired the walk at Boston Common since its inception in 2012 to 2017.

Edgren took last year off from chairing duties to help organize ACHA’s 20th-anniversary gala with her mother Dolores of Southborough, who also captains the walk’s Team Wee Care for Kimmie. The gala will become an annual fundraiser, scheduled next for Saturday, March 28, 2020, at the Verve-Crowne Plaza Hotel in Natick.

The Boston walk raised nearly $400,000 in seven years with proceeds shared between ACHA and Children’s Heart Foundation (CHF). In December 2018, the two organizations announced that each will plan a separate walk. CHF held its walk this past April at Boston Common. ACHA chose to explore a new venue.

“It’s the first year that the walks are separate, so we felt it’s a good time for a different location,” Edgren explained. “These walks have been done successfully at zoos in other cities across the country, so we’re excited. It will be a nice family event.”

Over the years, Edgren has observed medical progress in treating CHDs as well as survivors’ acceptance of the need for ongoing treatment into adulthood.

“ACHA empowers the CHD community to understand that it’s a lifelong journey,” she said. “Thanks to advancements, a lot of CHDs are now addressed within the first few weeks of birth, but there’s no fix and it’s a lifelong process. Transitioning from pediatric to adult congenital care is important.”

Edgren was born cyanotic with blue lips and fingernails from lack of oxygen. At 13 months, she underwent palliative surgery, which was deemed unsuccessful after six weeks. She had a second palliative surgery at 22 months. At age 9, she underwent surgery to insert a new valve and restructure her heart. The conduit has been replaced four times throughout her life. She expects needing future procedures.

“Other than needing to have the valve replaced, I’ve done very well,” she shared. “I know there needs to be continued medical interventions to keep me healthy. This will enable me to continue to thrive.”

The walk’s proceeds will help beneficial programs that are supported by ACHA, Edgren noted.

“Up until recently, most of us were treated by pediatric cardiologists who started seeing more and more adult patients,” she relayed. “It was just two years ago that an actual board certification for cardiologists with congenital training has been implemented. Money raised from the walk will help support these programs.”

On Sunday, Aug. 18, an informational event to learn more about the walk will be held at the Dorchester Brewing Company, 1250 Massachusetts Ave., Boston, from 6 to 9 p.m.

Walk for 1 in 100 registration is available online at secure.achaheart.org/boston. Find information about Team Wee Care for Kimmie at facebook.com/TeamWeeCareForKimmie.