As a child, Eliot Tatelman remembers traveling from his home in Newton to visit the Enchanted Village at the department store Jordan Marsh’s Boston Downtown Crossing location. A quaint recreation of a Victorian-era village during the Christmas season, the exhibit was a favorite of generations for decades.

Tatelman, the president and CEO of Jordan’s Furniture (no relation to Jordan Marsh) noted that his recollections of the iconic village “brought back great family memories.”

In 1998, when Macy’s took over Jordan Marsh’s Downtown Crossing location, they sold the Enchanted Village to the city of Boston. It was on display at City Hall Plaza, and then at the Hynes Convention Center, ending in 2005. At that point, the display was in terrible condition and was actually in danger of being dismantled for good.

But thanks to Tatelman, future generations will be able to cherish the same family memories. He bought the iconic Enchanted Village at auction in 2009 for $140,000, plus auction fees. Without Tatelman’s purchase, the Enchanted might have ended up in the trash. It is now on display at the Jordan’s store in Avon.

“It is emotional to see multi-generational families [now] visit the Enchanted Village together, enjoying time together. It actually moves some guests to tears, reminiscent of earlier years and simpler times,” said Tatelman.

The display’s facades and animated figures were originally crafted in the 1930s by Bavarian toymakers. A Lionel electric train was a central part of the display.

Jordan Marsh commissioned the display, hoping to attract more visitors to their Downtown Crossing store. They succeeded. Thousands and thousands enjoyed the Enchanted Village from the 1940s to 1972, and then from 1990 to 1998.

Everything now on display at Jordan’s is original. No facades and figures were added.

The display shows a much simpler, peaceful time, without the hustle and bustle of current life. Practically all of the figures are life-sized children in an assortment of Christmas scenes. Wrapped in scarves, and wearing warm coats, they are trimming trees, delivering wrapped presents, shining shoes, playing in a band, and even working in stores. There is also a waving Santa.

The Enchanted Village, which covers 8,600 square feet, has been on display during the holiday season at Jordan’s Avon location since 2010. Indoor snow flurries and upbeat, traditional holiday music add to the winter scene. For a fee, visitors can have their photo taken with Santa, and enjoy blueberry muffins made from Jordan Marsh’s original recipe.

Tatelman added that it is “great to be the home of an iconic Boston display and to be an annual holiday tradition for so many families.”

The Enchanted Village is on display at Jordan’s in Avon (100 Stockwell Drive), through Monday, Jan. 1. For hours and information, visit www.jordans.com/attractions/enchanted-village. 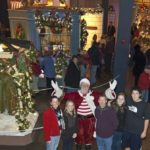 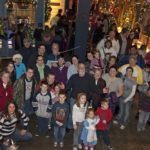