In April of 2013, a small group of like-minded folks started a Facebook page for people who love Ford Mustangs and want to hang out, go to car shows, or talk cars. From that page sprang the Mustangs of Massachusetts Car Club, boasting about 270 members throughout the state.

Larry Chiodi, vice president, treasurer, and membership manager, joined the group in May 2013, and was the 13th member to join. The group was founded by a friend of Chiodi’s named Marty Snyderman, the club’s president, Facebook moderator and website manager.

Chiodi said that having the Facebook group was “really helpful to facilitate chatting online and getting together.”

Snyderman came up with a logo for Facebook group and began displaying it as the group went to car shows. As the summer progressed, more and more people joined the group.

“Then, as we approached the fall,” Chiodi said, “we were thinking: we should have a barbecue or something.”

When they decided to begin collecting money to pay for a barbecue, group members started thinking about becoming an official club.

“That’s where I came in,” said Chiodi, who began doing a lot of research about social clubs in Massachusetts and talked to other social clubs about bylaws and roles for various club officers.

In December of that same year, Chiodi said, “we officially became a registered social club with the state of Massachusetts.”

“It grew quite quick,” he added.

Chiodi, who himself has a 2012 California Special Mustang and is restoring a 1987 Mustang, said Mustangs of Massachusetts is a little different than other car clubs. He said that a lot of classic Mustang clubs were more clubs for car collectors. Mustangs of Massachusetts, he said, is more about getting together and going places and doing things with your Mustang.

“We have a lot of activities,” said Chiodi.

He said the club has “five different regions across the state.” Each region has a monthly get together. The club also tries to raise money for different causes.

“We help with several charities and then we run one major charity event each year,” said Chiodi.

Every year, in late September, the group holds the “Cars and Critters” event for the Stone Zoo.

Also, every year at the New England Dragway in Epping, N.H., the group participates in The Ed Day Charity Challenge, a combination race and car show. In this event, teams compete for charitable causes and the winning team gets a donation for their chosen charity.

Chiodi said Mustangs of Massachusetts members have participated in charitable events for various causes such as wounded vets, autism, and fighting cancer.

“A big part of our club is to try and help in a charitable way,” said Chiodi.

So, what is it about the Mustang that draws such a loyal following?

“It came on to the scene as an affordable sports car,” Chiodi said. “And one of the key things they did with the Mustang is the concept of making it your own. It was highly customizable and you could order it with certain features and options. And then there were a lot of after-market features and options to customize it to the way you want.”

Ford, he said, has continued “keeping that mentality about the car.”

All that customization, Chiodi added, “really builds a personal investment and a pride about it.”

Add to this that the Mustang is a classic American muscle car, making Mustangs a “unique thing to be involved with. It really builds a good camaraderie and friendship,” he said.

While its members love the cars and it’s what brings them together, according to Chiodi, it’s really about the club’s members.

“The point we try to make is,” said Chiodi, “it’s about the people, really.”

Anyone interested in Mustangs of Massachusetts, membership and events can visit www.mustangsofmassachusetts.com/. 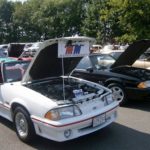 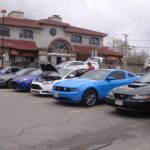 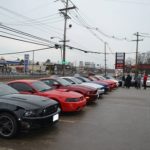 Mattie is with me when I vote