On Nov. 1, Honor Flight New England marked its 40th one-day trip to Washington, D.C. Since its first flight in June 2009, trips have been made by 1,361 World War II (WWII) veterans or terminally ill veterans including 34 prisoners of war (POW), 53 women, 20 sets of brothers, and seven husband and wife couples. Each veteran is transported roundtrip free of charge.

Continuing to travel on each flight is Joe Byron, founder of Honor Flight New England.

“For most of them, it’s their first time seeing the WWII Memorial because it was just completed in 2004,” he noted. “For some, this is closure. Many have been bottling up their emotions for 70 years. This is the first time where they’re with their comrades and can actually talk about it.”

According to its website, “The WWII Memorial honors the 16 million who served in the armed forces of the U.S., the more than 400,000 who died, and all who supported the war effort from home.”

Byron is a retired law-enforcement officer who investigated crimes against seniors. While building a rapport with the senior population, he’d often visit malls where they walk for exercise.

“I met this incredible WWII POW who told me his story and he still got emotional,” said Byron, an Army veteran of the Vietnam War era.

Soon after that chance meeting, Byron contacted the national Honor Flight Network and started the New England chapter. The nonprofit organization transports veterans at no charge through donations.

“We encourage the veterans to not even bring their wallet,” Byron said. “Their children tell us that at 90 years old they’re as excited as a kid at Christmas and can’t wait for the trip. They describe it as one of the best days of their life, behind getting married and having children.”

The highlights of the trip are visits to the WWII Memorial and the changing of the guard at Arlington National Cemetery. Stops are also made at other memorials commemorating specific wars and military branches.

“We have police escorts getting us through the traffic to ensure that we get to where we need to go,” Byron noted.

The one-day trip is usually about 15 hours from start to finish. After a full day of sightseeing, the veterans board the plane energized from the experience.

“On the way home, they’re the ones that are chattering because they’re so excited about what happened during the day,” Byron relayed. “They’re almost in awe of what has occurred. I enjoy their personalities, humbleness and appreciation for what we do for them.”

Honor Flight New England averages five or six trips a year in the spring and fall months. Flights are booked at Logan Airport in Boston and Manchester-Boston Regional Airport in Manchester, N.H. Each veteran is accompanied by a guardian, usually a family member other than a spouse. The travel cost for the guardian is $450.

Currently, Honor Flight New England is focusing on WWII veterans and any terminally ill veterans. They’re flown on a first-come, first-served basis. Applications from Korean War veterans are accepted and kept on file.

“We want to get as many WWII veterans as we possibly can to see their memorial,” Byron said. “When we, unfortunately, transport our last WWII veteran, then we’ll progress right into the Korean War veterans.”

In 2014, the Department of Veterans Affairs estimated that 413 American WWII veterans died every day.

For Byron, interacting with WWII veterans is a valuable learning experience.

“It truly has been a lesson in humility,” he said. “None of them thinks that they’ve done anything special. Many times they tell us, ‘We did what we had to do. The real heroes didn’t come home.’” 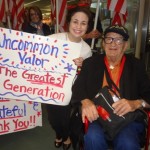 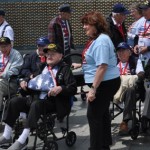