North Shore – David Landoni of Danvers began his career as a bassist touring on the road nationally and worldwide. Although the COVID-19 pandemic stay-at-home advisory halted his usual gigs throughout New England, he continues teaching music as an adjunct professor at UMass Boston – albeit remotely. On the upside, he now has more time to travel on North Shore’s backroads as an avid bicyclist.

“Once I started getting proficient on the bass, my dad asked me to play with his band, too,” Landoni relayed. “Playing the old standards with my dad is how I got into jazz. It was good training for me.”

A 1982 GHS graduate, Landoni attended Boston’s Berklee College of Music while working weekends as a bassist at weddings and other gigs. He graduated from Berklee in 1986.

In 1989, he got hired to tour with the Artie Shaw Orchestra led by multi-instrumentalist Dick Johnson of Brockton. Landoni was recommended for the gig by acclaimed jazz trumpeter and fellow Gloucester native Herb Pomeroy.

“I had zero big-band experience, so I hit the ground running,” Landoni acknowledged. “It was fun playing with a 17-piece orchestra, and seeing a lot of the country and different parts of the world.”

Along the way, the orchestra’s namesake Artie Shaw joined the musicians to lead rehearsals on a cruise from San Juan to Barcelona. Another highlight for Landoni was the opportunity to perform for a national audience on the 1991 PBS television special “Big Band Ballroom Bash” cohosted by song-and-dance star Juliet Prowse and cabaret singer-pianist Bobby Short.

Countless concerts continued on the road.

“We were playing five or six days or nights a week,” Landoni recalled. “We’d travel thousands of miles in a week, going from town to town, all one-nighters. We’d go on 10-week tours and by the end of the 10th week the band sounded so good.”

He left the road in 1991 to perform and record with some of New England’s top jazz artists. In the mid-1990s, he began a 10-year stint with the Herb Pomeroy Trio, performing in Gloucester and recording CDs.

Landoni instructed bass at Salem State University from 2006 to 2015. He has taught at UMass Boston since 2015 and welcomes the chance to share his firsthand knowledge of playing electric and upright bass with the next generation of musicians.

“A lot of my students have gone on to study at Berklee College of Music, have graduated and have become teachers themselves,” he noted.

Additionally, Landoni typically plays various musical styles with a number of performers at many New England venues. His last gig before the pandemic restrictions was March 14. He’s looking forward to returning to his eclectic schedule.

“One night I’m playing straight-ahead jazz, and the next I’m playing pop music on electric bass,” he said of his usual routine. “I love working with different people every night because it’s always a new experience while making new friendships. There’s nothing like a collective of people sharing the common goal to make great music.”

A longtime bicyclist, Landoni credits his father as a role model not only for his musical skills, but also for an appreciation of physical exercise. His father competed in rowing races in Gloucester from the late-1960s to mid-1970s.

“As a kid, I had training wheels on my bike for maybe an hour before my dad took them off and I went riding,” Landoni recounted. “My dad always worked out. He’s now 83, still exercising and reaping the benefits.”

Similarly, Landoni benefits from bicycling. With some downtime while pandemic restrictions are in effect, he has been riding 150 to 200 miles per week.

“Cycling on the North Shore is fabulous with so many backroads to explore,” he said. “I ride up to 80 miles on all backroads with very little car traffic during the day. My doctor says I have the heart of a 20 year old. It’s extremely important to keep moving.” 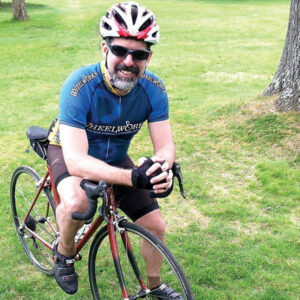 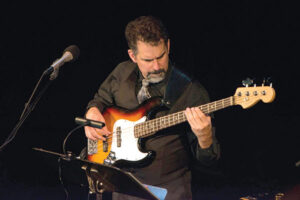 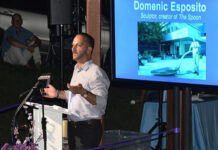