Boston – Getting work can be a challenge for any actor. For Bill Mootos of Boston, he manages to steadily perform at regional theaters locally and beyond, as well as portray movie and television roles in productions filmed in New England. Furthermore, he serves as an elected national board member of SAG-AFTRA, the merged unions of Screen Actors Guild with American Federation of Television and Radio Artists.

Mootos began achieving these accomplishments about a decade after an accident caused him to endure multiple surgeries throughout his 20s, including a hip replacement and spinal fusion.

“I’ve learned to never take anything for granted,” he said. “It’s important to appreciate your health and ability to move around. That’s especially hard to do when you’re young.”

After graduating from Stoughton High School, Mootos spent time in New York City and studied theater at Pittsburgh’s Carnegie Mellon University. A few days before starting his junior year in 1988, he was visiting his parents in Stoughton when a vehicle struck and injured him.

“A drugged driver drove up on the sidewalk and hit me from behind,” he explained. “For roughly 10 years, I had several different surgeries. It wasn’t until ’96 that I felt well enough to get back into theater.”

“It felt great to be back onstage, doing what I love to do,” he recalled “When you have issues with your leg and lower-back, it can be challenging to sustain rehearsals and performances. I never gave up the idea that acting is what I wanted to do.”

In 1999, after working film and TV acting jobs, Mootos joined SAG and AFTRA. He got elected to serve officer positions with the SAG Local Board beginning in 2003 and is currently a SAG-AFTRA National Board member. (The two unions merged in 2012.)

“When I started doing union work, I realized why it’s crucial to get involved,” he noted. “We sometimes get paid well, but artists really do need to put our voices together and work toward what is fair to make a living.”

Among factors in his decision to reside in Boston rather than relocate to New York City or Los Angeles was medical care locally. Fortunately for him and his colleagues, work opportunities have increased since Massachusetts launched a film tax credit incentive in 2006 for qualifying productions shot in the state. However, the law contains a sunset provision. The credit is scheduled to sunset December 31, 2022.

“I’m hoping that legislators will continue to support the film tax credit and make it a permanent fixture,” Mootos said. “It has benefitted actors and film crews, but also dozens of ancillary businesses – many of which were created through the success of the tax credit.”

His most recent movie appearance is “Little Women.” The scene was filmed on the Orchard House property in Concord, where Louisa May Alcott wrote the 1868 novel on which the 2019 film is based. Mootos plays Mr. Davis, a teacher of the character Amy March, portrayed by actress Florence Pugh.

“We had a lot of little girls on the set, and Florence was really welcoming and inclusive with all of them,” Mootos relayed.

Also in 2019, he appeared in two episodes of “Castle Rock,” Hulu’s psychological-horror series set in Stephen King’s multiverse. The scenes were shot in downtown Orange.

“There’s always something I love about each production I work on,” he said. “For a long time it looked like I’d never be able to do this, so I have an extra level of appreciation for being able to consistently work as a performer. It’s always an honor and privilege to get that opportunity.” 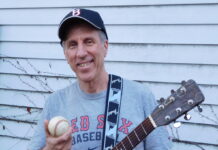