Looking at a perfectly clear, pristine block of ice, sculptor Don Chapelle, 59, can envision a 3D shape inside. He uses an assortment of tools—sometimes a chainsaw but more often a chisel—to create a figure, a colorized corporate logo, or almost anything else that he can imagine.

It seems that Chapelle was destined to be an ice sculptor. Growing up in Enfield, Conn., he remembers carving blocks of wood when he was very young.

When he was 15, Chapelle worked at the former Chateau de Ville, located nearby in East Windsor, Conn.

“I was always a worker bee. The Chateau was amazing place. The Rat Pack was always there – Sammy Davis, Dean Martin. I was young, but I got to cook, and that’s where I started carving ice,” he recalled.

Next up, at the age of 18, was a stop at the Holiday Inn in Springfield, Mass.

“I was the head chef and I was sculpting ice. I lived at the hotel,” said Chapelle.

From Springfield, Chapelle moved on to do the same at the Ramada Inn in Woburn.

Then he made a detour to study accounting at Bunker Hill Community College. Even though he was the best in his class, according to Chapelle, he knew that his passions laid elsewhere.

He chose to hone his skills as a chef in a two-year program at the Culinary Institute of America (CIA) in Hyde Park, N.Y.

“It was very militaristic, but I learned a lot,” said Chapelle.

It was also where he met his mentor, Alfred Georges, a famous German chef.

After the CIA, Georges helped Chapelle secure a position as an executive chef at Boston’s Museum of Fine Arts (MFA). Georges promised that he would help Chapelle eventually land a position in Europe.

During his time at the MFA, and when he was studying at Bunker Hill, Chapelle advanced his ice carving at Brookline Ice and Coal, and later, at the Ice Box in Roslindale.

By the time he arrived in Europe, Chapelle’s ice sculpting skills were well developed. In order to get a work permit in Europe, he needed to do something unique, and ice sculpting was the ticket.

Thanks to Georges, Chapelle was fortunate to work at two Michelin star restaurants: Le Cygne in Geneva, Switzerland, and Prince Eugene in Vienna, Austria.

Chapelle founded his business, Brilliant Ice, when he returned to the U.S. in 1986.

“The director called me and asked me to supply an ice sculpture, but said he couldn’t pay me,” said Chapelle.

After that first year, for the next 27, Chapelle was paid to create massive, complex ice sculptures for First Night.

But then his association with the event ended abruptly three years ago.

“I was very unhappy when Mayor Marty Walsh contracted an event planner to run First Night, and that contractor cut down from three ice carvers to one. There’s no way to get the same level of creativity when one carver makes three pieces. It was really a shame given my 27 years of giving back to the community,” Chapelle commented.

As for creating sculptures, working inside a freezer that’s 18 to 23 degrees, Chapelle carves blocks of ice that are 40 inches tall, 20 inches wide, and 12 inches thick. Some sculptures are made up of two or three blocks, and some have as many as 60. Heated sheets of aluminum are used to fuse together the blocks on site.

Delivering ice sculptures is always a challenge. To do so, Chapelle employs five part-time drivers.

“They are very talented,” he said. 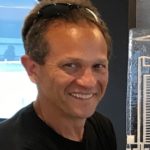 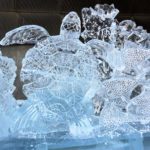 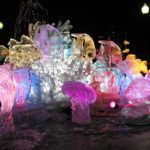 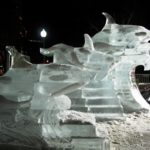 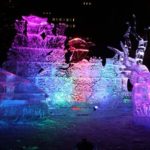