We marched in the 60s; now we’re all 60. It’s time to use those same voices to make change.

The quote comes from a participant at the first meeting of The Radical Age Movement, a New York-centered but nationwide grass roots group that “challenges traditional notions of aging and introduces new ideas for building co-creative and interdependent communities.” Author Ashton Applewhite shared the quote on her Twitter page (twitter.com/thischairrocks).

The twitter account is an offshoot of the 68-year-old Brooklyn resident’s “This Chair Rocks: pushing back against ageism — which affects everyone” blog (thischairrocks.com) that she brought to the Internet in 2007. She uses social media to promote the blog. 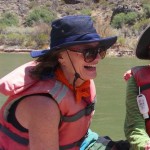 “I’m a little bit of a technophobe and it is a bit of a struggle for me, but I am possessed by this cause and the need to raise awareness of ageism, and clearly if I’m going to do that, I need to use the tools of the day,” Applewhite said. “It’s very useful. I’ve met many good people. I’ve gotten work through it. I’ve done the groundwork because that (social media) is where the next generation does a lot of its communicating.”

And communicate she does, sometimes one person at a time, starting with a reporter’s question. When asked if having pro-active civic, political and cultural organizations like the Radical Age Movement allows members of her generation to revisit the excitement of their youth, she’s quick to scold. She points out that the phrasing of the question holds an age bias that suggests the most passionate civil participation takes place in people’s younger years.

And she’s right. The question is ageist.

“I don’t like the suggestion that it (social activism) might make you reminiscent of your youth,” Applewhite explained. “When we say we feel young, we use ‘young’ as a substitute for feeling energetic or feeling important or feeling engaged.”

She said it’s important to use words that apply to any age because the symptom or activity being described is of the moment, not because a certain age has been reached.  “Sometimes we say, ‘I feel old,’ when what we really mean is, ‘I feel tired,’ ‘I feel miserable’ or ‘My feet hurt.’ What’s really going on is your feet hurt, and they can hurt at any age.

“I would hope — and I do think — that a movement is starting to happen, that the Radical Age Movement involved people of all ages because ageism affects young people as well as old people — it affects our whole life,” Applewhite said.

“Its most drastic effects are on old people because of the focus on the youth culture, but teenagers, in particular, also feel it extremely. It affects 20-year-olds who get depressed because they’re not having the most fabulous careers and sex and everything every minute which they (feel they) should be because they’re 20.”

The expectations of what life should be like at certain ages is presented through the imagery and messages put forth by mass media and advertising and can serve as an oppressive measure, turning people into products with an expiration date. “That’s a trauma by society,” she said. “Not all women who are 30 think, ‘I’m over the hill now.’”

Perhaps no bigger stigma hovers over a segment of the United States population than those who’ve been burdened with being called baby boomers, those folks who were born between 1946 and 1964. Applewhite doesn’t love the term ‘baby boom’ because it implies homogeneity and puts its 76.4 million people (according to the April 2014 figure from the U.S. Census Bureau) into a single classification. “In an ideal world, I wouldn’t generalize about generations at all, but let’s face it, it’s a handy term,” she said.

While she hopes all generations will participate, Applewhite thinks the heart of the Radical Age Movement will be people in their 50s, 60s and 70s.

“My generation is both starting to accept the fact that we are aging — which is a good thing — and pushing back against it,” she said. There’s a double edge to the activism in that while it promotes taking down the barriers of expectations of people based on their age, it’s also important that we remember that although proper maintenance can benefit our body and its physical and mental capabilities, we shouldn’t ignore the realities of time.

“We feel we need to try to stay healthy to stay mobile, but I think it’s also a little delusional to think you can exercise and do vitamins, and work your way out of aging. You can’t, so you have to be careful that it’s not a form of age denial,” Applewhite said. “We have to be accepting of the fact that we are aging.”

On the other hand, as we reach the ages of 50, 60, 70, we have been conditioned to dread each of those timeline marks as a terrible step towards decrepitude, dementia and depression. “And we get there and it’s not that bad,” Applewhite said.

One of the things that’s refreshing about talking to Applewhite is her admission that she too, at one time, believed these stereotypes — and that we all have a lot of work to do to reverse and change them.

“I hugely overestimated the percentage of people over 65 in nursing homes,” she said. “It’s 4 percent. I was astonished to hear that, just to learn, maybe I was more ignorant than other people, going into this, that the vast majority of people live independent lives until they come down with whatever kills them. They live independently, they enjoy their lives — they probably have some memory loss since cognitive capacity does diminish — but older people are functioning effectively in the world.”

She said the long-held belief that older people are depressed also doesn’t hold up to study. “Older people actually have better mental health than young or middle aged people,” she said.

As a society, older folks need to learn not to accept these stereotypes. “Most people don’t know these very basic facts and are stuck in a way more negative view of late life so that when they encounter discrimination, they don’t challenge it,” Applewhite said. “When they forget something, they think, ‘Oh, it’s because I’m 65,’ forgetting that when they were in high school, they couldn’t find the car keys either.”

The same way of thinking applies to those pesky aches and pains. “If my knee hurts, I think, ‘Oh my knee hurts because I’m 65 and I’m getting old,’ ” she said. You think that discomfort is a result of your age — without ever thinking your other knee doesn’t hurt.

So how to overturn these long held beliefs? Let’s start with the workplace, where older folks might feel the reason they can’t get a job is because of their age. “Well, you might need to hone your skills,” Applewhite said. “You might need to present yourself differently in the world.”

While she’s not saying anti-older worker bias doesn’t exist in a society that says older people aren’t worth as much as younger people, part of her mission is to let people know that not one of the myths about older people in the workplace holds up. If business owners would look at the data, they would have a different perspective.

“(Older people) learn things just as well,” said Applewhite. “They are more job loyal. They are happy to learn new things. They are receptive to training. They stay on the job longer.”

All social change begins with awareness, she said. “The first step in any movement is to look at our own biases, which is uncomfortable because they’re unconscious or unseen and no one wants to acknowledge that they’re biased or that we’re all biased,” she said.

As an example of how attitudes can change, she cited the way women were portrayed for decades as being less competent, less intelligent and unable to handle positions of authority.

“For a long time, until the women’s movement, women just bought that,” Applewhite said. “Before (Betty Friedman’s 1963 book) The Feminine Mystique came along, these middle class housewives, if they were unhappy, just thought, ‘I need a better washing machine or a fluffier soufflé.’ And they blamed themselves (for being unhappy).”

Applewhite thinks there’s little difference in ageist attitudes toward older people based on their sex, but pointed out that for many white men, the first time in their life they experience being a minority and being discriminated against on the basis of something they can’t change is when they retire.

“Since everyone ages, men are hostage to that as well as women,” she said. “The process of coming to terms with your changing identity and feelings of diminished visibility and lack of power are pretty universal.” Many older women, she added, are doubly victimized in life, having experienced sexism and now ageism.

While changing institutional attitudes toward aging might seem like a monumental task, individual attitudes may be even more difficult to reverse as many of those propagating them actually think they’re being supportive.

“There are two problems with that: It’s a compliment that comes at the expense of everyone else your age but also it’s based on the assumption that people at a given age look a certain way.”

Applewhite has come up with a snappy answer to those comments with the aim of creating an ”aha” moment. “When they say, ‘You look good for your age,’ I just say, ‘You, too’ — and then people have to stop and think, ‘Gee, I thought I was being nice. Why didn’t it feel like a compliment?’ It didn’t feel like a compliment because you made me think of my age.”

She does admit these can be tough ethical calls. “It’s really important to try and figure out accurate, low key ways for how people can change their attitudes or just point out a better way of phrasing something or approaching a situation as an effort to catalyze that all-important change in attitude.

“You don’t want to be finger wagging — you want people to come to their own realization, like, ‘Gee, I’ve been thinking about that a certain way and I have to change’ — and that’s a hard thing to do without feeling defensive.”

One way Applewhite furthers those discussions is through the “Yo, Is This Ageist?” offshoot of her blog (yoisthisageist.com), in which she responds to questions from her readers. (It’s based on the similarly thought-provoking ‘Yo, Is This Racist? website).

Recent topics included whether it was proper for The New York Times to call New England Patriots quarterback Tom Brady “ageless,” whether the way Madonna and Miley Cyrus portray themselves onstage creates an unrealistic desire for physical perfection and whether an otherwise healthy 70-year-old character on the TV show House should have been given a heart transplant.

Applewhite’s website has a series of options to help. She’s putting together a template for consciousness raising that will be downloadable for free. “The first step is to look at what’s happening inside yourself. The second step is to try and move that out in the world and these conversations are the tool.”

She spent much of the past year writing a book, tentatively titled, This Chair Rocks: The Pro-Aging Manifest, which she’s currently shopping to publishers.