Region – Eastern Massachusetts Senior Softball (EMASS) is now launching its annual recruitment campaign for players age 50 and over. The 400-plus member league draws players from towns across Eastern Massachusetts with games played on fields in Framingham, Medfield, Ashland and Wayland. The season begins May 1 and runs until Labor Day, with playoffs completed in early October.

EMASS offers seniors of all skill levels a safe, well-organized opportunity to play competitive slow-pitch softball. Founded in 1995 with four teams and 80 members, EMASS has evolved into five divisions, 33 teams and over 400 members. 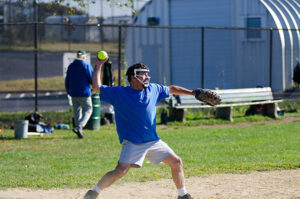 The league’s members range in age from 50 to 90. The average age is 67 with 70 players in their fifties, 160 in their sixties, 140 in their seventies and 30 in their eighties. Members’ skill levels range from casual recreational players to those who play on nationally competitive tournament teams. Players of any skill level will find a spot with players of similar abilities in one or more of EMASS’s five divisions. Two divisions play doubleheaders on Saturday mornings and three divisions play doubleheaders on weekdays.

The spirit of Senior Softball is evident in its post-game tradition of the opposing teams forming lines to congratulate each other with high fives and fist bumps. Competing in senior softball is a statement. Players thumb their nose at Father Time and they are deeply grateful to take the field and compete together as teammates or opponents. 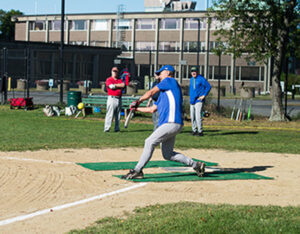 “The EMASS softball-loving community competes with sportsmanship and camaraderie,” said Walker Royce, Commissioner of EMASS. “Besides all the fun and banter of a team sport, we also provide each other with a healthy support network for getting through life’s senior challenges. That could be fighting through cancer, rehabilitating a knee replacement or just hitting over 500.”

Players share some of their joys of playing in EMASS

EMASS players know how blessed they are to play. They are inspired by the elder players who can still perform well in their late seventies and eighties. They love seeing a teammate return from an injury or some life-threatening ailment. They enjoy that three-hour escape to the fields where camaraderie, teamwork and competition block out life’s challenges and stresses.

“EMASS is an oasis for me,” said David Ossam, a first year player in 2019. “No matter what personal or professional pressures I am facing, those weekly hours are refreshing and uplifting. Playing the game I love with people I truly enjoy makes life sweeter and more fun.”

“I have found EMASS to be a well-run, welcoming league, providing a good balance of fun and competitiveness,” said Dan Jolly, who has played in EMASS for two seasons. “All of my teammates have been fantastic to get to know and they have inspired me to look forward to many more softball seasons as I look to retire.”

“Over 21 years, EMASS has provided me with the opportunity to re-live my youth and play the game I love,” said Joe Salzano, now 83 and a seasoned EMASS player. “I have established long-lasting relationships with players both on and off the field.”