Stoneham – New York City native and now Stoneham resident Maggie Whalen has spent most of her life entertaining children and adults as a hand puppeteer. Now, she’s expanding her audience with a shadow puppet show specifically geared for older adults.

While living in NYC, a teenage Whalen became inspired in 1967 when she watched a PBS-televised presentation of puppeteers.

“I happened to see some fabulous puppeteers, The Little Players, who performed for only adults in their Upper West Side apartment for a subscription audience,” she explained. “I started making puppets that same day.”

Soon afterward, she performed with her handmade puppets at a 4-year-old child’s party.

“That was my first performance with an audience,” she noted.

In 1971, she created and directed Poor People’s Puppets with performances by two to four puppeteers. Their home base was a storefront theater on St. Mark’s Place in Manhattan’s East Village. She named the theater Balloon-Face Maggie’s, recollecting a childhood nickname that her grandfather called her. Whalen enjoyed interacting with everyone involved with the puppet troupe.

“It was fun playing off of each other and other puppets,” she said. “I’ve never worked from a script or played a recording instead of using my voice in a puppet show. When you’re improvising with somebody it can be really fun because you don’t know what they or the audience is going to say. I always include some audience interaction – that keeps it fresh for me.”

Whalen moved to Massachusetts in the mid-1970s. During the summer of 1974, she interacted on a larger scale with the Bread and Puppet Theater, a politically radical puppet troupe in Glover, Vt., founded by Peter Schumann. There, she created costumes, and operated giant puppets and masks as part of its annual Domestic Resurrection Circus.

“Peter Schumann’s shows are overtly political; my politics come through in more subtle ways,” she said. “For example, I have two female tailors in ‘The Emperor’s New Clothes’ and Amelia is the little pig who builds the brick house in my ‘Three Little Pigs’ show.”

In 1976, Whalen began doing business as Magpie Puppets, for which she continues to create and perform puppet shows for all ages at various venues. From 1989 through 2007, she taught puppetry periodically at Club Med in the Bahamas, Dominican Republic and Guadeloupe. Additionally, she has taught puppet-making workshops and built custom-made puppets for individuals, theaters and filmmakers.

One of her custom-made puppets appears in a documentary about Brother Theodore, a German-born American comedian, who passed away at age 94 in 2001. The documentary, titled “To My Great Chagrin: The Unbelievable Story of Brother Theodore” by filmmaker Jeff Sumerel, premiered in 2008 at the Museum of Modern Art in NYC. Whalen was invited and attended the premiere. Joining her puppet in the film are a number of notable performers including Woody Allen. Dick Cavett, Henry Gibson and Penn & Teller.

Early in her career, Whalen supplemented puppetry projects with part-time legal secretarial work. In 1993, she earned a bachelor’s degree in therapeutic applications of the creative arts at UMass Amherst University Without Walls. In 1996, she received a master’s degree in occupational therapy at Tufts University, Department of Occupational Therapy, in Medford.

Having worked as an occupational therapist (OT) at Veterans Administration and rehabilitation facilities, Whalen said, “I always wanted to work with that population again, but didn’t want to do it as an OT. I also wanted to try my hand at creating a shadow puppet show.”

In the past two years, Whalen has been presenting “Shadow, Songs and Stories” at assisted living facilities.

Whalen is also looking forward to increasing her performances at venues such as senior centers.

“Reasons I like puppetry are because I like to sew, paint, draw, act and sculpt with clay – puppetry lets me do all that,” she said. “I do wish I had a roadie and a driver, but all the rest is great.” 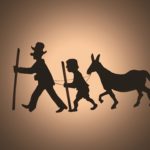 Scene from “Shadow, Songs and Stories”