Dry eyes are not a new phenomenon, in fact; most people have experienced them at various times throughout their lives. In most cases, dry eyes are a nuisance causing minor discomfort often brought about by eye strain or exposure to dry, windy conditions. However, for those suffering from chronic dry eye, the problem can cause significant pain and discomfort that can result in damage to the surface of the eye. It is estimated that over 25 million people in the United States and some 300 million worldwide suffer from dry eye.

Dr. Donald Korb of Korb and Associates, based in Boston, is widely recognized as one of the leading researchers and experts on the matter of chronic dry eye. Dr. Korb has been studying the issue for some 30 years and has published over 100 papers on the topic. As he explains, the issue first came to his attention in 1980 as he was researching and developing extended wear contact lenses.

To his surprise, several subjects in the study showed an unusual intolerance to this type of contact lens which led him to develop a hypothesis that the problem was tied to an oil deficiency on the surface of the eyes. While the accepted belief at that time was that dry eyes were the result of inadequate tear production, Dr. Korb was convinced that dry eye was due to an oil deficiency related to obstruction and dysfunction of the small Meibomian glands that line each eyelid.

When functioning correctly, the Meibomian glands serve to coat the ocular surface with oil to preserve moisture, while dysfunctional ones allow rapid evaporation and the resulting dryness.  Dr. Korb teamed up with Dr. Antonio Henriquez of Barcelona, Spain, and the result was the discovery that the affected subjects in the study were suffering from obstructed Meibomian glands which resulted in the contact lens discomfort. Dr. Korb named the condition Meibomian gland dysfunction (MGD).

“What was difficult to believe is that a competent eye doctor could closely examine the eyes and the lids, yet would be unable to determine that the glands were obstructed without special tests utilizing pressure. In our original scientific article we stressed that the condition was not obvious. A thorough review of the non-obvious nature of Meibomian gland dysfunction was published in 2010. The difficulty in making this diagnosis led me to invent a device known as LipiView which is now used routinely to make this evaluation,” Dr. Korb said.

After identifying the problem, Dr. Korb directed his full focus to both research and the treatment of patients dealing with MGD. As he discovered, the Meibomian glands are small and delicate and if they are not producing quality oil, the problem can quickly deteriorate into acute inflammation. Due to his background as a researcher, Dr. Korb was able to rapidly study patient problems that arose in his own practice.

In order to diagnose and treat the problem of MGD on a much broader basis, he co-founded a company called TearScience which not only pioneered the LipiView tear evaluation device, but also produced LipiFlow, a device that simultaneously heats the inner lid surfaces while applying pulsatile pressure in order to improve oil flow and diminish inflammation. To date, the device is being used in over 250 eye care practices with over 100,000 patients having received treatment.

When asked about the significance of his invention, he looks back on that period as both challenging and rewarding.

“LipiFlow has been an exciting experience, perhaps the most exciting of my life. While I have over 20 inventions, 10 of which have been marketed, the complexity of developing the science of thermal pulsation treatment was by far the most complex. Although I have chosen not to be involved with the operation of the business, preferring research and clinical practice, seeing TearScience grow to employ over 100, including 10 engineers, has been like a dream,” he said.

“In addition, having had access to tens of millions of dollars for this research, we’ve had  funding for many clinical studies and discoveries which are now in clinical practice to be used by all without fees,” he added. “This could not have been better or more exciting!  I regularly receive letters from dry eye sufferers around the world who I have never met; that is a source of great gratification to me.”

Although Dr. Korb’s efforts have helped literally thousands of patients address their MGD and regain ocular comfort, he is concerned about the impact of electronic devices such as smart phones, tablets and computers on future generations. One issue that exacerbates MGD is extended screen time, not just from the standpoint of eye strain, but because it reduces one’s blink frequency, an action that is critical to the distribution of oil on the ocular surface.

According to Dr. Korb, our society’s dependence on electronic devices is likely to result in a dramatic increase in MGD over the coming years. In fact, he indicates he is already seeing an unusual increase in the number of cases involving young people and teens.

“Our group recently published a report in a prestigious journal titled ‘Dry eye is the wrong diagnosis for millions’.  The correct diagnosis for over 80 percent of those suffering from dry eye is Meibomian gland dysfunction,” he said. “This is important for the future because the professions must recognize that obstruction of the glands is the usual cause of dry eye and that a key factor in this obstruction is inadequate blinking.  It is well documented that excessive screen time dramatically reduces a person’s blink rate.

“In fact, a recent study conducted by our group showed that the incoming class at a prominent health care school already had concerning signs of dry eye. Based on the latter study, which will be published this year, 62 percent had symptoms which worsened as the day progressed, 41 percent were forced to use artificial tear supplements daily, 17 percent had discomfort using a computer, and over 50 percent had significant atrophy and permanent loss of at least 20 percent of their Meibomian glands.  Dry eye is on its way to becoming a major public health problem and will only increase unless a government funded task force is enlisted to combat what is already a vocationally disabling disease for many.”

One of the most notable things about the way Dr. Korb addresses problems with dry eye is his very deliberate and methodical approach to diagnosis and treatment. Most likely a product of his background as a researcher, he methodically tests and reevaluates patients over a course of several appointments. In all cases he records copious notes about what is and isn’t improving. He’s quick to point out that dry eye is not something that can be resolved in a single visit. The ability of the eyes to maintain the appropriate amount of moisture depends on a delicate balance of Meibomian oil, adequate tears and proper blinking. Should these factors fall out of balance; the result can be inflammation which often cascades into problems resulting in even more discomfort.

“It is critical for the eye care practitioner to understand that a systematic approach is required to make the correct diagnosis before initiating treatment. While over 80 percent of all dry eye sufferers have meibomian obstruction and dysfunction, it is critical for the doctor to evaluate a minimum of four other factors; the nature of the blink, the efficacy of lid closure when sleeping, the extent of meibomian gland atrophy and the status of the sensory nerves,” Dr. Korb said. “One can treat with LipiFlow, but not achieve success for the patient unless all of these areas are addressed.  The patient must understand that there will be homework, analogous to dental care, where office treatment must be supported by brushing and flossing.”

To colleagues and patients alike, Dr. Korb’s tireless work is fueled by a very rare level of passion and commitment. Whether he’s caring for patients or pursuing the next breakthrough in his research, Dr. Korb is a man on a mission. He is a deeply compassionate individual whose desire to learn about this affliction drives him to treat over 100 patients per month while still dedicating a minimum of three days per week to his research.

When asked why he is so focused on this particular affliction and why he has made it his life’s mission, Dr. Korb is characteristically enthusiastic.

“Truthfully, some 35 years ago when I discovered the role of Meibomian gland dysfunction, I had plans to retire at an age which would allow me to follow my other interests, including working to help children pursue higher education in order to realize their own dreams. I also wanted to research the role of ego in mankind’s progress and failures – I still find this exciting.

“However, with every discovery, with every new publication, and with the creation of treatments, procedures and products for both patients and doctors, it was clear there was much more to accomplish. I still am excited every day by what I do and it is my hope that more can be accomplished to alleviate the suffering of over 30 million people in the USA with dry eye. Frankly, there is no area that provides me with the level of satisfaction and daily stimuli than  what I do.  I have been, and continue to be very fortunate.”

Korb and Associates is located at 400 Commonwealth Avenue in Boston. The office can be reached at 617-426-0370 or www.korbassociates.com. 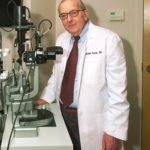